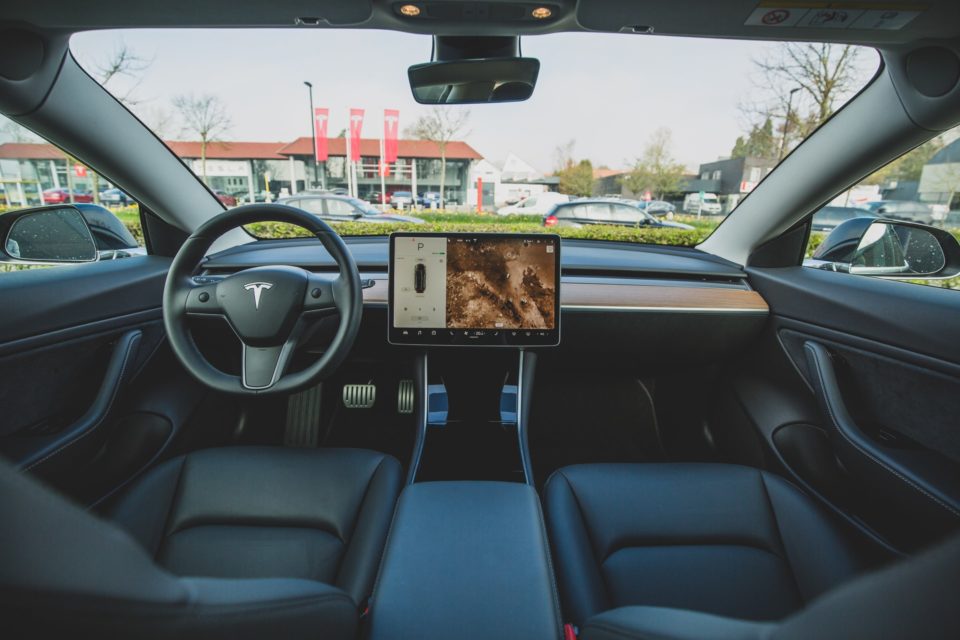 Welcome back to your weekly roundup of mobility news from across the globe! Rideshare drivers celebrate a big win in New York as a federal judge orders the state to pay drivers unemployment benefits, Tesla may license its software and hardware (including Autopilot), a Beijing-based EV company just raised $1.1 billion in its US IPO, while another EV automaker – Karma – also looks to go public, Germany builds the world’s first passenger train hydrogen fuel station, and Austin, Texas may be getting a subway. Yeehaw, giddy-on up for more! 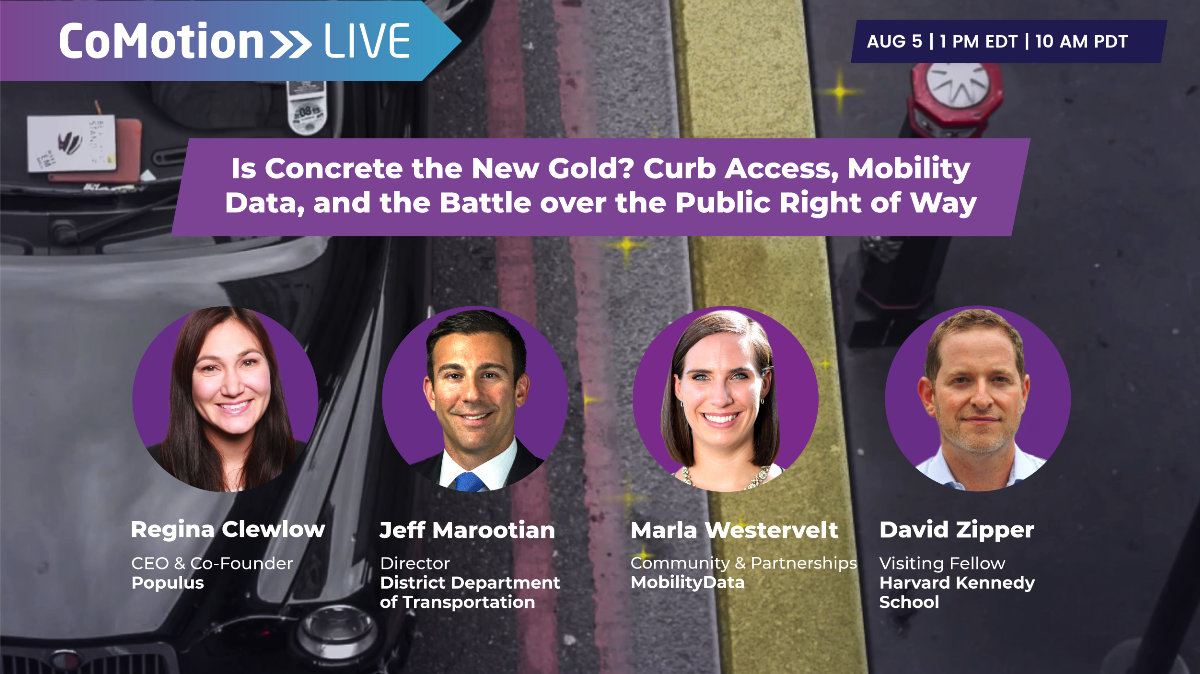 Dueling delivery companies. Armies of gig workers primed to drop off packages at breakneck speed. A full color spectrum of scooters, TNCs and e-bike options to choose from at the push of a button. The curb has always been a congested place, but in recent months the competition for limited access to it has reached a fever pitch. While a cavalcade of mobility operators fight for this increasingly valuable turf, cities are working overtime to manage who gets a slice, what data companies have to provide in return, and how much to charge for it.

Join Regina Clewlow, CEO & Co-Founder of Populus; Jeff Marootian, Director of DC’s Department of Transportation; Marla Westervelt, who leads Community & Partnerships in North America and Asia-Pacific for MobilityData; and David Zipper, a Visiting Fellow at the Harvard Kennedy School and find out how the battle for the curb is playing out, on a special edition of CoMotion LIVE, Wednesday, August 5th: “Is Concrete the New Gold? Curb Access, Mobility Data, and the Battle over the Public Right of Way.” 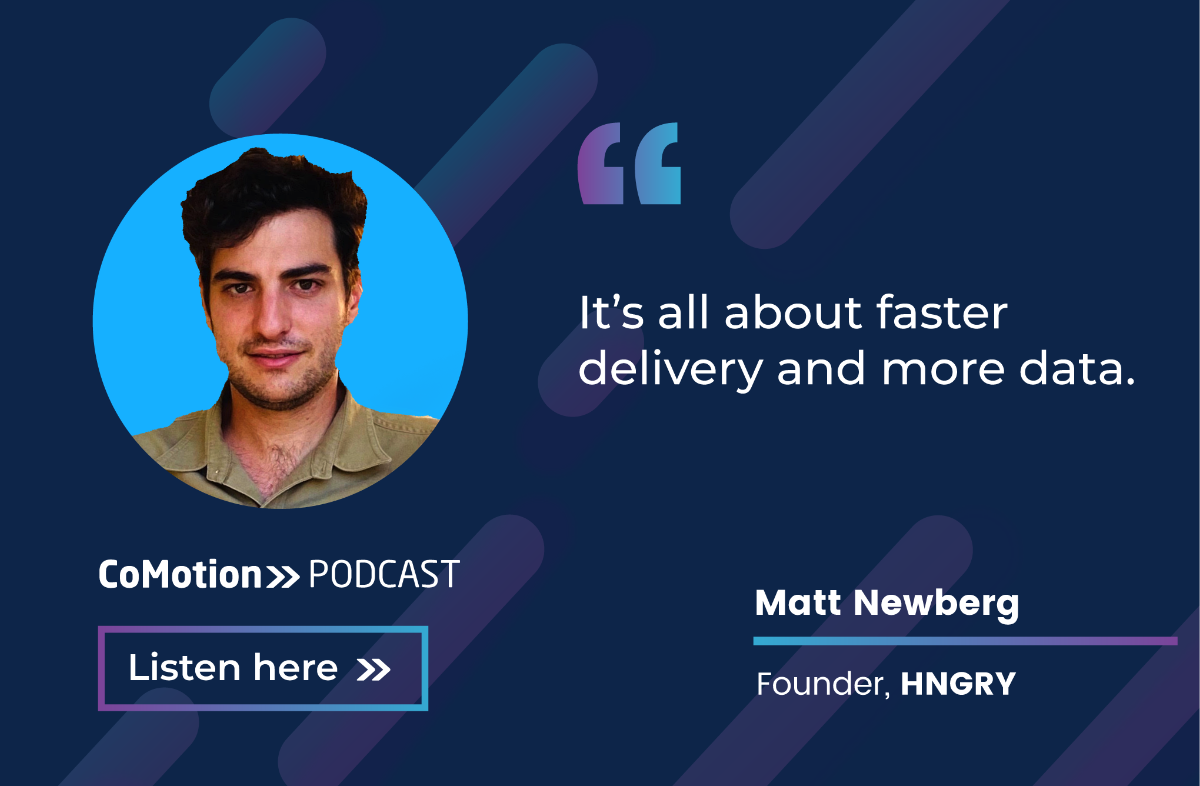 Amir Ghorbani, CEO & Founder of Swoop, dives into how his freshly capitalized company is bringing small, local limousine and charter bus operators into the 21st century with his company’s unique platform, as well as his plans for the future, and how Swoop is handling the current global pandemic.

A win for drivers: a federal judge strikes a blow against TNCs fighting to keep drivers classified as freelancers: the judge ruled NY State must begin paying unemployment benefits to rideshare drivers immediately. This decision may have a cascading effect, as labor organizers and Uber / Lyft square off in other states.

Birth of a unicorn: Li Auto, a Beijing-based EV manufacturer, just hauled in $1.1 billion from its U.S. IPO. As investors are bullish on the EV sector (just look at Tesla) expect the Nasdaq-fueled gold rush to continue.

Bavarian batteries: as BMW works towards offering 25 electrified models by 2023 (half of which will be pure EVs), the company just announced it will offer fully-electric versions of the popular 5 Series, 7 Series, and X1 SUV. Gute Idee!

Electrify those lines: along LA Metro’s path to convert its entire bus fleet to EVs by 2030, the G Line BRT will be the first to drop fossil fuels and go all-electric by the end of the year. Next up? The freeway-cruising J Line. Here’s hoping these busses last a while, as they cost over $1.15 million each.

Slow down! In a bid to prevent pedestrian deaths, the National Association of City Transportation Officials just released a framework to help local leaders rethink how speed limits are set, including designating slow zones in sensitive or dense urban areas.

Put it to a vote: 20 years after a failed referendum scuttled rail in Austin, voters in the Texas capital will get a second shot at building transit. The Texas Capital’s City Council just approved a ballot measure to fund a $7 billion mass transit plan that includes a downtown subway, multiple light rail lines (including an airport link) and new bus routes.

A tough quarter: as the pandemic drags on (especially in America) GM reported $806 million in red ink in Q2, as well as a 47% drop in revenue when compared to the same time frame last year. GM’s U.S. vehicle sales alone dropped 34% compared to Q2 2019, as consumers tightened their belts.

A greener tomorrow? However, GM does have some hope for the future… GM and EVgo are teaming up to deploy 2,700 new fast-charging stations over the next five years. The chargers are meant to help apartment dwellers in dense cities who otherwise would be unable to charge an EV, with sites near grocery stores, retail, cafes, gyms and more. GM also just kicked off construction of its almost 3-million-sq-ft battery cell factory. The joint venture between GM and LG Chem is key to GM’s plans of bringing 20 EVs to market by 2023.

On a more somber note: Revel has suspended its seated moped sharing service in NYC after two recent fatalities. As at least one of the two victims wasn’t wearing a helmet, Revel is now reviewing safety measures and communicating with city officials.

The cheapest EV in America: Chinese electric automaker Kandi is going to bring its K27 and K23 EVs to the United States, with pre-sales starting mid-August. The base model price after the federal tax credit? A wallet-friendly $12,999. It may even sell for as low as $10,000 in select states.

Where’s the evidence? Recent research suggests that mass transit may not actually be as dangerous as previously thought. While any social interaction is risky, riding public transport doesn’t pose a major threat to the average (mask-wearing) commuter, as almost every outbreak cluster across the world comes from bars, restaurants, music venues, gyms and the like.

Personal space: despite the above evidence to the contrary, riding mass transit during the pandemic can be nerve wracking, especially when it’s difficult to socially distance. To address those concerns, NY’s MTA updated its apps so riders can see live ridership data and judge if a given train or bus is too crowded.

Wunderbar! A coalition made up of the Association of German Transport Companies and the Pro-Rail Alliance have proposed significantly expanding passenger train services by reopening 238 disused/freight-only lines. All together, that would create an additional 4,016 km of commuter infrastructure. The majority of the tracks are in western states, sure to raise the ire of former East Germans, who still haven’t reached economic parity with their counterparts nearly 30 years after reunification.

Growth despite the pandemic: Lyft is expanding beyond ridesharing, growing its Lyft Rentals program beyond Los Angeles and San Francisco, filling the hole left by Hertz’s downsizing. Through a new tie-up with rental car company Sixt, the program will initially expand to Las Vegas, Miami and Seattle.

Good Karma: hoping to ride the wave of Tesla’s massive success in the markets, luxury EV automaker Karma is looking to go public. “We want to take advantage of the fact that the market is red hot right now, so we want to be fast,” said Mikael Elley, chief of staff at Karma Automotive. With Tesla currently holding the title of “World’s Most Valuable Carmaker”, it certainly seems like the time to cash in.

A step closer to the future: in the US, the Department of Transportation and its internal deliberative body the Non-Traditional and Emerging Transportation Technology (NETT) Council has made it so Hyperloop projects are allowed to receive federal funding. Hyperloops now have a federal regulatory framework, given a similar designation as high-speed rail, under the Federal Railroad Administration (FRA). Now all someone has to do is actually start building one…

Glass half full: Boeing’s CEO Dave Calhoun is still hopeful the sector will recover in the second half of 2021. That’s a healthy dose of optimism after Boeing posted a $2.4 billion loss for Q2 2020.

Full steam ahead: Caltrain’s saga continues, with San Francisco and Santa Clara counties approving a November ballot measure to fund the beleaguered commuter railroad, but only if it includes governance reforms. That’s ticked off San Mateo County, the RR’s current administrator, amid claims the new measure doesn’t fully comply with state law. Sadly, even that shaky scheme is now dead on arrival, putting Caltrain’s entire future at risk. Fingers crossed they work things out, as the railroad just received and began testing the first seven cars for its new, all-electric fleet.

Lucid Air or vaporware? Nearly 4 years after first unveiling its luxury EV, Lucid Motors is showing off its advanced feature set that is meant to help it stand out from the competition. Chief among those differentiators: a 32 sensor ADAS that includes lidar, radar, ultrasonic sensors, and more.

Giving away the keys to the kingdom? Aiming to capture new revenue streams, Elon Musk said “Tesla is open to licensing software and supplying powertrains and batteries.” Going further, Musk even said he’d be willing to license Tesla’s Autopilot software too.

Billions on billions: three years after its first $1 billion+ investment came from Ford, Argo AI just raised another cool $2.6 billion, thanks to some fresh cash from Volkswagen. This puts the Pittsburgh-based AV company at a $7.5 billion valuation, with both Ford and VW having 40% ownership stakes.

Flying-taxi: Airbus’ helicopter division takes a big step forward as its new eVTOL makes its first public flight. The demonstration took place July 20th, at Airbus facilities in Bavaria. Able to carry four passengers for 60 miles, and cruising along at 75 mph, Airbus is hoping its CityAirbus will be the future of UAM.

More fun than a PS5: Sony’s recently unveiled Vision-S EV will begin road-testing this fiscal year. The four-seat fastback sedan packs in 536 horsepower, delivering a 0-62 mph time of 4.8 seconds, along with Level 2 autonomous driving capabilities. With built-in 5G connectivity and Tesla-like over-the-air updates, the Vision-S could even be improved to Level 4 or higher autonomy, according to Sony.

Britain bets big on biking: the UK is launching a new government organization to encourage cycling and walking. With a £2 billion budget over the next five years, Britain will launch Active Travel England, with the goal of improving bike/pedestrian infrastructure across the nation.

Get to the e-choppa! Rather than focusing on hardware innovation in the vehicle itself, Kawasaki looks to streamline the manufacturing of electric motorcycles, designing a vehicle where the battery and electronics can be built in a single factory. Kawasaki isn’t the only one innovating in the world of electric two-wheelers: in Europe, Germany’s BlackTea significantly brings down the cost of the electric motorcycle with a 50 mph Moped under $5000.

China transforming: as the pandemic continues, bicycles are changing the way many Chinese move around. Some notable trends: commuters are increasingly opting for bike-sharing instead of public transport, the electrification of bikes and scooters is rapidly picking up speed, and sharing providers are rebalancing their vehicles more intelligently to match vehicles to areas with high demand.

Big moves in Great Britain: English residents will now have more control over problematic bike infrastructure with the creation of a new watchdog group that oversees bike and pedestrian paths. Boris Johnson, along with doctors, will start prescribing cycling to work as a means to fight COVID, as well as obesity. And a plan to adopt “low traffic neighborhoods” — prioritizing walking and cycling in London — has accelerated from three years to three weeks, taking advantage of the drop in traffic associated with lockdowns.

Fast Company, looking at how the Waymo Driver is going to affect delivery networks, energy conservation, warehouse design and more.

CitiesToday, stressing that it’s important for cities to collect mobility data to ensure equity in transport.

The Tennessean, arguing that economic recovery will be in jeopardy unless public transit is properly funded as low-income and minority communities workers are more likely to be essential workers.

World Economic Forum, sharing how the pandemic has revealed the need for a rethink in urban planning.

CityLimits, offering an opinion that the coronavirus outbreak has given NYC a real opportunity (and necessity) to redesign its transit system. 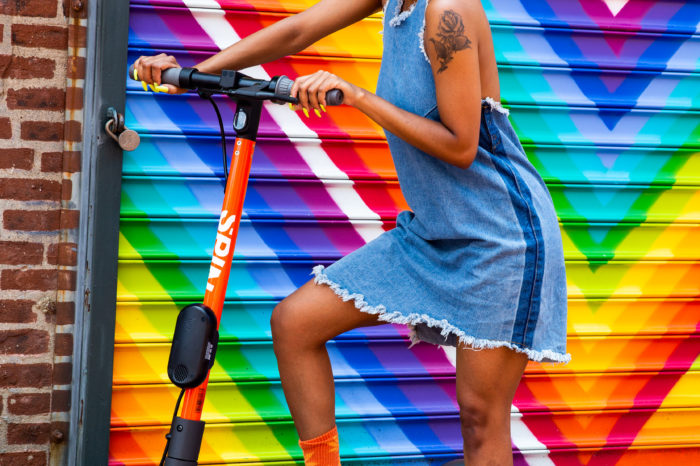