It’s been another big week for mobility’s movers and shakers. Looks like Fiat Chrysler is finally betting big on EVs, matching other exciting announcements from Ford and Jaguar; meanwhile, Amazon raises the stakes in the grocery-delivery game. On the public transit front, things ain’t great for New York or London, but the U.S. government has a fresh load of dosh for Phoenix and Kansas City. And if you feel like flying high, do join us on Wednesday for an exciting conversation on the future of eVTOLs. 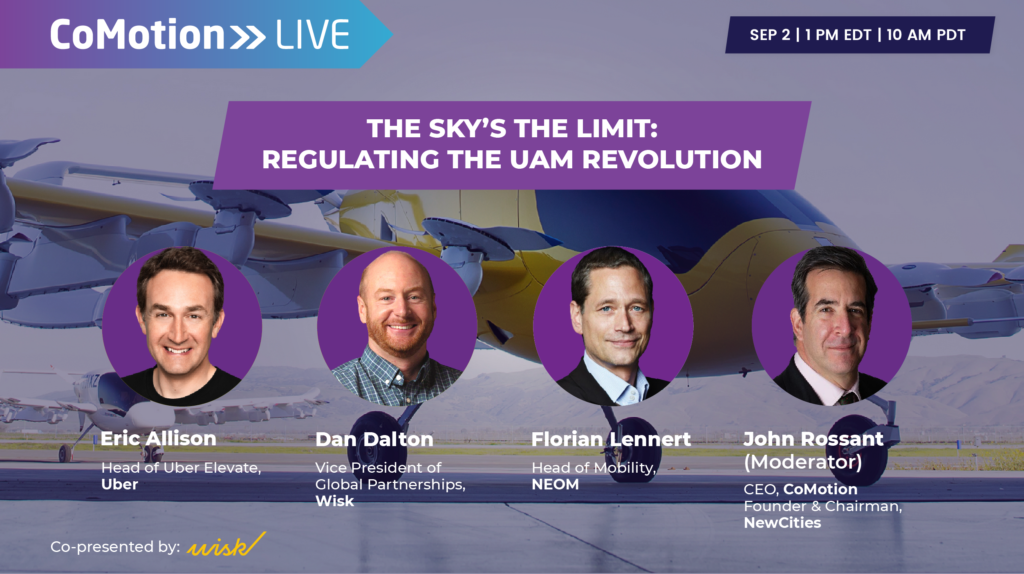 Join us Wednesday, Sept 2, for an important and forward-looking episode of CoMotion LIVE: The Sky’s The Limit: Regulating the UAM Revolution.

John Rossant, Founder & CEO of CoMotion, leads a high-level conversation with a roster of the industry’s top thinkers: Eric Allison, Head of Aviation Programs at Uber, leading the Uber Elevate initiative to re-imagine urban transportation through the air; Dan Dalton, who as Vice President of Global Partnerships at Wisk leads regulatory initiatives at the pioneering all-electric, self-flying air taxi manufacturer backed by Boeing and Kitty Hawk; and Florian Lennert, Head of Mobility at NEOM, Saudi Arabia’s future city that has eVTOLs at the heart of its transportation mix.

Ghosts of kitchens past: Postmates launches its first “ghost kitchen” in Downtown Los Angeles, letting restaurant concepts quickly ramp up delivery operations. The choice of LA makes sense, as it is the only city where Postmates holds a dominant market share position.

“Times are grim.” After months of ominous warnings, New York City’s MTA lays out what will happen if it doesn’t receive federal aid. The grim future could include up to a 50% cut in service on certain lines, wait times stretching to half an hour, and even higher fares. Ya listening, Washington?

Smart carts? As part of its never-ending push to reshape shopping and delivery patterns, Amazon opens a new LA-area grocery store featuring “Amazon Dash Carts”, letting shoppers check out instantly. Other features include a pickup/return station for Amazon orders, and Alexa integration. Southern California has long been considered one of the most competitive markets for grocers, so if the Everything Store can make it work in LA, expect to see the concept expand to a neighborhood near you.

You call that cheap? Looking to reinvigorate flagging sales, Jaguar is releasing an updated version of its I-Pace EV SUV. The new model sacrifices a bit of power for nearly $20,000 in savings… but will still clock in at roughly €65,990 (~$77,855) after VAT. No word yet on updated US pricing, where current models start at $69,850 before incentives.

Mac and yellow, mac and yellow: just how hot is the delivery space getting? Hot enough that rapper and entrepreneur Wiz Khalifa will open a delivery-only restaurant this fall, featuring pun-tastic dishes like the “mac and yellow” and “taylor gang turkey burger.” Do hold the mayo…

Fancy some fast fish? Talk about freight innovation, Japan’s JR East railway is testing the use of its high-speed trains to transport fresh fish from coastal Sendai to hungry diners in Tokyo. Expect your sushi to make the journey in just a tad over two hours…

Don’t tell your kids, but electricity plus water is good! Sure you’ve seen EVs race and e-trucks haul… but how about something new? Take a look at the world’s first electric hydrofoil boat, built in Sweden and cruising along at up to 30 knots. Bring ‘em on, we say.

Fair fares? Following a trend that spans from Luxembourg to Tallinn, LA Metro is considering eliminating fares to win back riders who’ve abandoned the service in the wake of the pandemic. While some advocates cheer the move, others are wondering if, given limited budgets, those same dollars might be better spent on improving service…

Breaking new ground: Ford starts construction on a new Michigan factory to manufacture electric F-150s. With Dearborn’s EV variant of the country’s best-selling vehicle hitting the streets in the next two years, we expect these will sell like hotcakes.

“It’s not too early for cities to craft AV regulation.” GovTech’s Skip Descant takes a look at the major takeaways from the most recent CoMotion LIVE discussion on the impact autonomous vehicles will have on cities and businesses both large and small.

Bio before IPO: Tony Xu. Stanley Tang. Andy Fang. Evan Moore. Meet the unlikely executives who built DoorDash into a multi-billion dollar business, and are now preparing the delivery giant for one of the biggest IPOs of the year.

Feeling cross about rail: Talk about a delayed train… London’s Crossrail opening is delayed yet again (until 2022) as costs continue to rise.

Three-wheeled EV: Vancouver-based Electra Meccanica is finally going into production on its long-anticipated Solo, an EV three-wheeler that tops out at 80 miles per hour and features 100 miles of range. Unfortunately for interested East Coast buyers this will be a West Coast exclusive for now, due to the company’s retail distribution network. The CoMotion team went for a test spin recently, and we can tell you it’s a surprisingly fun ride for an ~$18,000 trike. Let’s see more of these on our streets!

JeEVep: Fiat Chrysler hasn’t exactly been a leader when it comes to EVs, so we’re excited to see it going all-in with a new electric Jeep Grand Wagoneer. This environmentally friendly rock-crawler won’t come cheap, however, with top-end versions topping out at over six figures.

ICYMI: CoMotion takes an exclusive look into SoftBank Vision Fund’s myriad mobility bets, analyzes the successes and failures of each, and suggests that building a mobile-payment focused super-app just might offer salvation for the beleaguered investor juggernaut.

More trucks for Texas: Waymo joins TuSimple and Aurora in setting up major autonomous trucking operations in the Lone Star State. Given that Texas is home to the most truckers in the country (one in sixteen jobs in the state is directly supported by freight transportation), and is a vital route for cargo from Mexico, we can see the appeal…

Talk about a hybrid vehicle! Naganohara, a small town in Japan, will become home to the world’s first self-driving amphibious bus. Catering to tourists, this odd-duck of a vehicle is set to start self-driving by December.

We’ve run out of SPAC-related puns… When is the reverse-merger gravy train going to run out? LiDAR-maker Luminar set to go public via a SPAC, looking to boost its market capitalization to $3.4 billion.

The rumors were true: NACTO publishes scooter and bike sharing report showing significant growth. 2019 saw 136 million rides in the US, equivalent to “the fifth-busiest subway or light rail system in the country.”

Scooters live to see another day: California removes language from proposed bill AB 1286 that could have effectively killed shared micromobility in the state. The bill would have forbidden liability waivers that prevent lawsuits from injuries resulting from poor road conditions to reckless drivers.

Too many Bolts: Australia’s Bolt Bikes raises an $11 million Series A to help it go international and rebrands to Zoomo. The new name better reflects its offerings to a broad customer base and prevents confusion with other similarly named companies.

Swap that apple for a scooter: Bird to offer free 1 hour per day rides to US educators to help them get around as they start of the school year, even if they are working remotely.

The Guardian, with a deep-dive into how commuting changed the face of Britain.

The New Yorker, with a heartbreaking look at one New York transit worker’s struggle to get by.

Smart Cities Dive, taking a look at the impacts police brutality and COVID have on the quest to build a 20-minute city.

Decarbonizing Transportation, interviewing LACI’s Alex Mitchell on LA’s potential to be the capital of electric mobility.