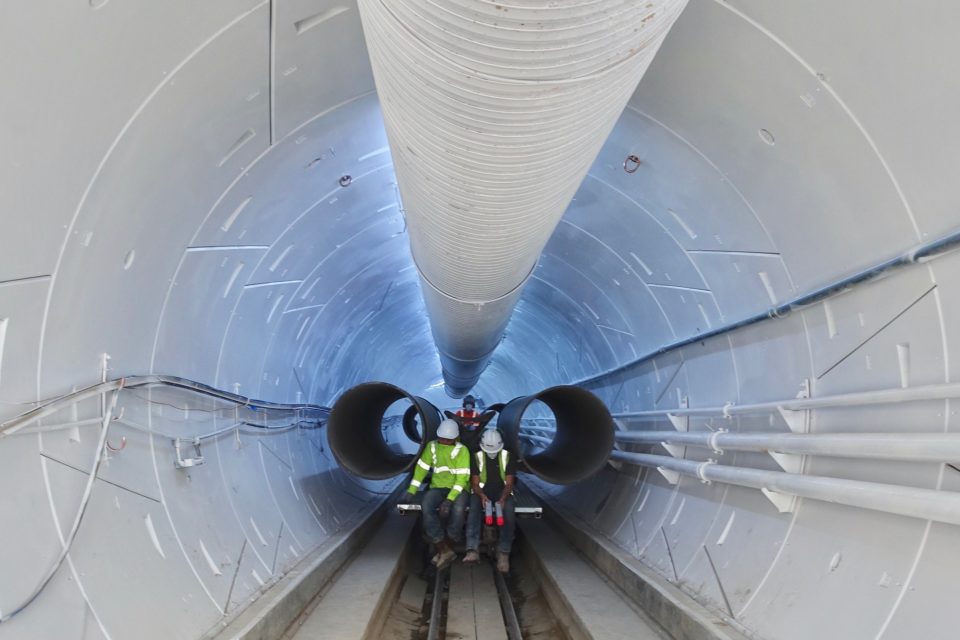 Cities across the globe may be slowly emerging from lockdown, but the world of mobility continues at its ever-quick pace. In the past week, we’ve seen a spate of new EV announcements from Audi and Alfa Romeo, Tembici raise $47 million to expand micromobility in LatAm, and Germany go all-in on electric motoring. Meanwhile, The Boring Company set its sights on a new project in SoCal, and Kitty Hawk gave up on its dreams of everyone owning a personal flying car (😔). 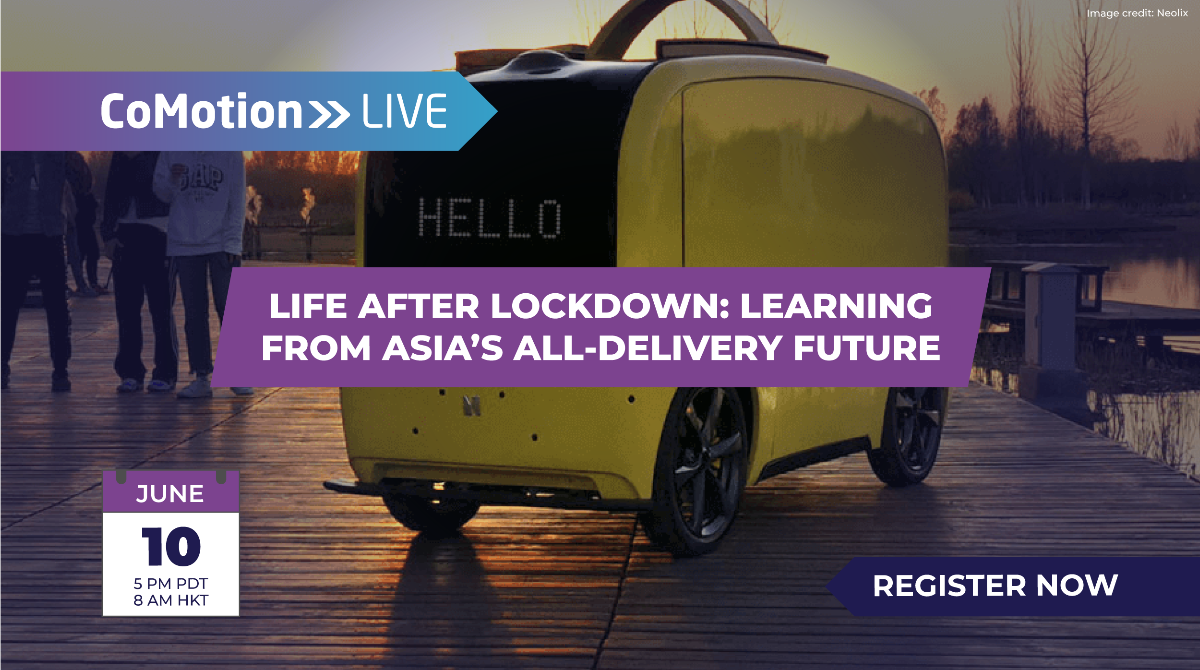 Join us this week for the latest edition of CoMotion LIVE: Life After Lockdown: Learning from Asia’s All-Delivery Future. We’ve just added William Bao Bean, General Partner of VC firm SOSV, to the lineup. He’ll be joining Neolix’s Co-Founder Kevin Xu to showcase how delivery and robotics are powering Asia’s post-COVID future. This session is at a special time: Wednesday at 5 PM Pacific, and Thursday at 8 AM Hong Kong / Singapore / Beijing Time. Register today. 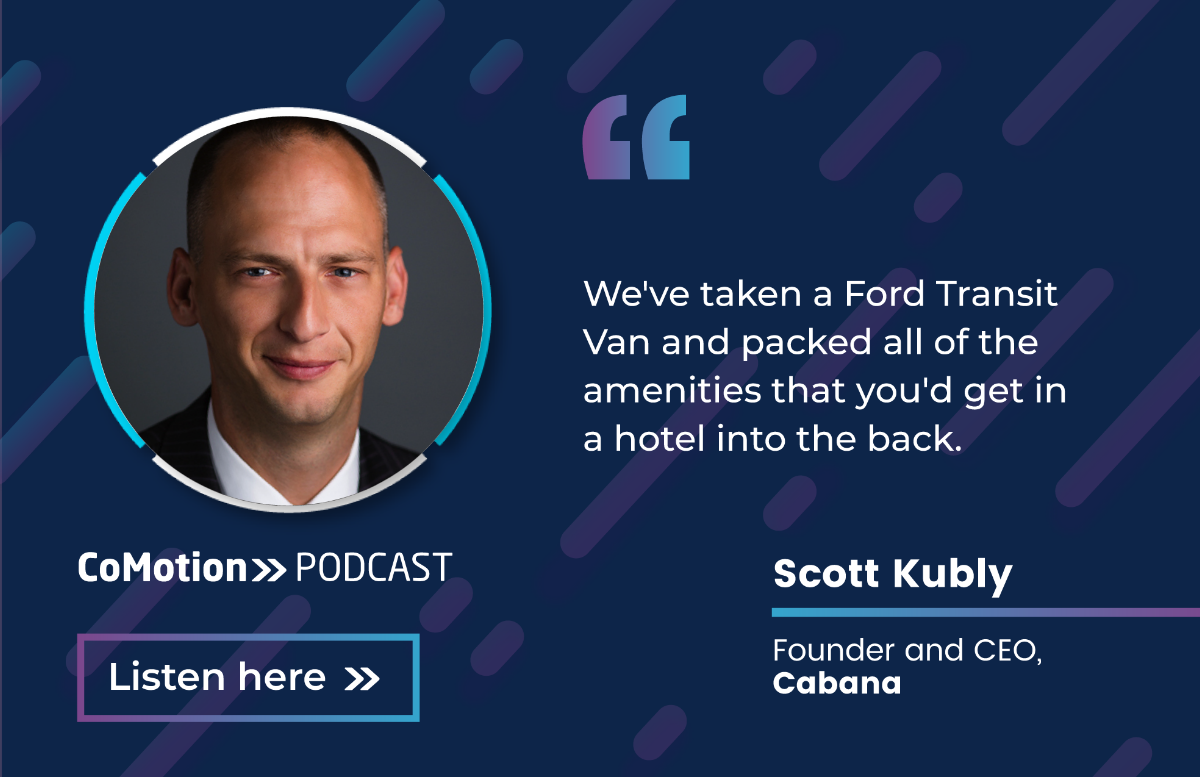 Episode 69. Greg Lindsay sits down with Scott Kubly, former Director of the Seattle Department of Transportation who is now the Founder and CEO of Cabana, to discuss how his company combines van-life, car-sharing and a boutique hotel all into one unique service. Greg Lindsay also chats with Jonah Bliss about the fight for open streets and the protests sweeping cities across America (as well as the world) and other happenings of the week. Listen here.

Things will get better: Bestmile co-founder and CEO Raphael Gindrat sees reasons to be optimistic about city streets following the pandemic, offering a glass-half-full vision of post-pandemic urban mobility.

Symbolic shutdown: the heart of the George Floyd protests beats in Minneapolis and St. Paul. Protestors have taken to marching down I-94, a highway that, when constructed in the 50s and 60s, destroyed a once-thriving African-American neighborhood.

Electricity takes the lead: Tesla’s Model 3 has become the top-selling passenger car in California in Q1 2020. The popular EV has supplanted the long-reigning, much cheaper, Honda Civic. This isn’t just a trend for eco-conscious Californians, as the car also just logged a second month in a row as the UK’s top seller. Way to go, Elon.

Onwards and upwards: São Paulo-based shared bike provider Tembici just took in $47 million in a Series B funding round. Already holding a whopping 80% share of the LatAm micromobility market, the operator will use the fresh dosh to expand its docked e-bike offerings.

Better late than never: Fiat-Chrysler has lagged a bit in the EV space…until now. Next year, its Alfa Romeo brand will release a plug-in hybrid SUV, followed by a fully electric model in 2022. That’s two years sooner than BMW and Audi’s recently announced EV offerings.

Step into the majors: Facebook and PayPal are backing Indonesia’s Gojek, one of Southeast Asia’s most successful startups ever. Long a ride-hailing giant in its own right, the company has since entered the payment market, which piqued the American internet giants’ interest.

Electric Audi: the automaker is launching a new production team called Artemis, intended to develop an efficient electric car. The new EV would hit the market by 2024 — perhaps to compete with BMW’s recently announced all-electric M5?

Lightning quick: GM is reportedly moving to beat Tesla to the punch in the commercial electric van sector. The automaker is aiming at businesses like Amazon and UPS, going head-to-head against the likes of Rivian.

Deutschland goes alles-in on electrification: as part of a sweeping stimulus package in Germany, electric car subsidies will be doubled and the country’s sales tax will be temporarily reduced from 19% to 16% (when buying an EV, that is). On top of that, Germany is going to require every gas station in the country to have an EV charger. Seems like Volkswagen is going electric at just the right time.

More tunnels for the Southland? In a win for Elon Musk’s The Boring Co., San Bernardino County’s transport agency voted to pursue a high-speed tunnel to Ontario International Airport, thanks to highly competitive construction cost estimates. Not boring at all, we think.

The fight for change: urbanism advocates and activists are trying to shift the conversation about how we use our public spaces, to better confront institutional racial injustice. We’ve rounded up some of the most thought-provoking pieces.

Shifting priorities: Google co-founder Larry Page’s Kitty Hawk is shutting down its Flyer program, but not giving up its aviation dreams entirely. It will now focus on its Heaviside project, a once-secret electric aircraft designed to be fast, quiet, and fully autonomous.

Not our sAVior? While humans cause 94% of car crashes, a new IIHS report reveals AVs will only be able to stop 1/3 of those collisions. Evidently even the top software is no match for prediction, planning and execution errors. CoMotion NEWS explores what causes those errors, and why solving them isn’t so easy.

Big money: Pittsburgh-based self-driving car startup Argo AI just took in a whopping $2.6 billion investment from Volkswagen. This comes after Ford’s $1 billion investment in the AV company back in 2017. Argo plans to use the cash injection to expand to Europe and add 1,000 new staff.

Clipped wings: Bird is destroying 8,000 – 10,000 e-scooters in the Middle East. The scooter juggernaut acquired them as part of its acquisition of Berlin-based Circ in January, but after COVID decimated demand, old scooter models are being sent to the junkheap. After Lime / JUMP’s recent scrapping of thousands of ebikes, we’re not liking where this trend is headed…

2020 World Bicycle Day: it’s easy to see one of the few silver linings of the pandemic in light of last Wednesday’s World Bicycle Day: the huge uptick in people riding bikes. If those habits stick, we’ll have healthier and safer cities for all.

I like to ride my bicycle: cities are repurposing street space to accommodate the shift in usage as more people use bicycles for mobility, exercise, and recreation during the global COVID pandemic. The latest cities are Lisbon, installing 34 miles of pop-up bike lanes and Toronto, with a proposal to expand its cycling network by 25 miles.

The real EV story: BloombergNEF projects that electric bikes will likely be the dominant force in transportation electrification with over 180 million two and three-wheeled-bikes currently on the road today, projected to grow to 600 million in 20 years.

Another scooter turf war: after the UK announced e-scooter trials would begin this month, Voi, Tier, Lime, Bird and Dott have all lined up to fight for a slice of British roads.

Rest of World, sharing how Brazil’s favelas are using WhatsApp to get real-time updates on bus routes.

Euronews, asking if cycling will be the big winner after lockdowns are lifted.

CityLab, analyzing how the battle over public space is playing out on the streets just outside the White House.

Digital Trends, with a plan to save public transit as it teeters on the brink of destruction. 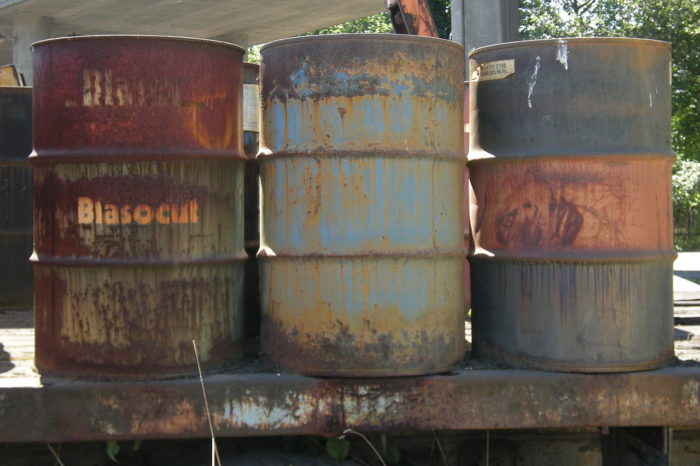 How The Oil Majors Are Handling The Petroleum Market Meltdown