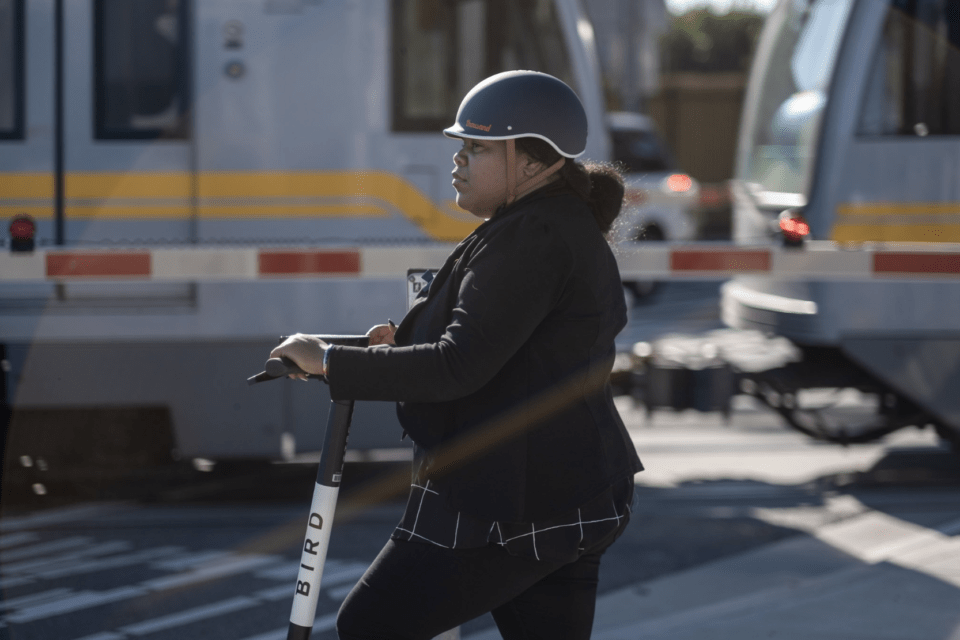 While the coronavirus pandemic has changed the face of transportation in the short term, micromobility will still be a viable option once life in cities returns to a more familiar form. While shared scooters may not be lining the streets today, this data still makes a compelling case for their use in the future.

How long would you be willing to walk to access a train or bus stop?

According to urban planning experts, the answer is around 10 minutes. Anything beyond this half-mile radius falls into what’s known as the “last mile problem,” i.e. the inconvenient and often costly distance separating a transportation hub from one’s final destination. And it’s here where new evidence suggests that e-scooters are already having a significant impact.

By increasing the distance that can be traveled over a given period of time, scooters augment the reach of bus, train and metro stations by up to 9 times. This makes public transit a convenient alternative for a significantly larger amount of people.

In fact, in cities with robust transit networks like Washington D.C. and Chicago, new data indicate that 20% to 30% of scooter trips connect to public transportation. The number is not quite as high in car-centric cities like Los Angeles, but it’s surprisingly close. 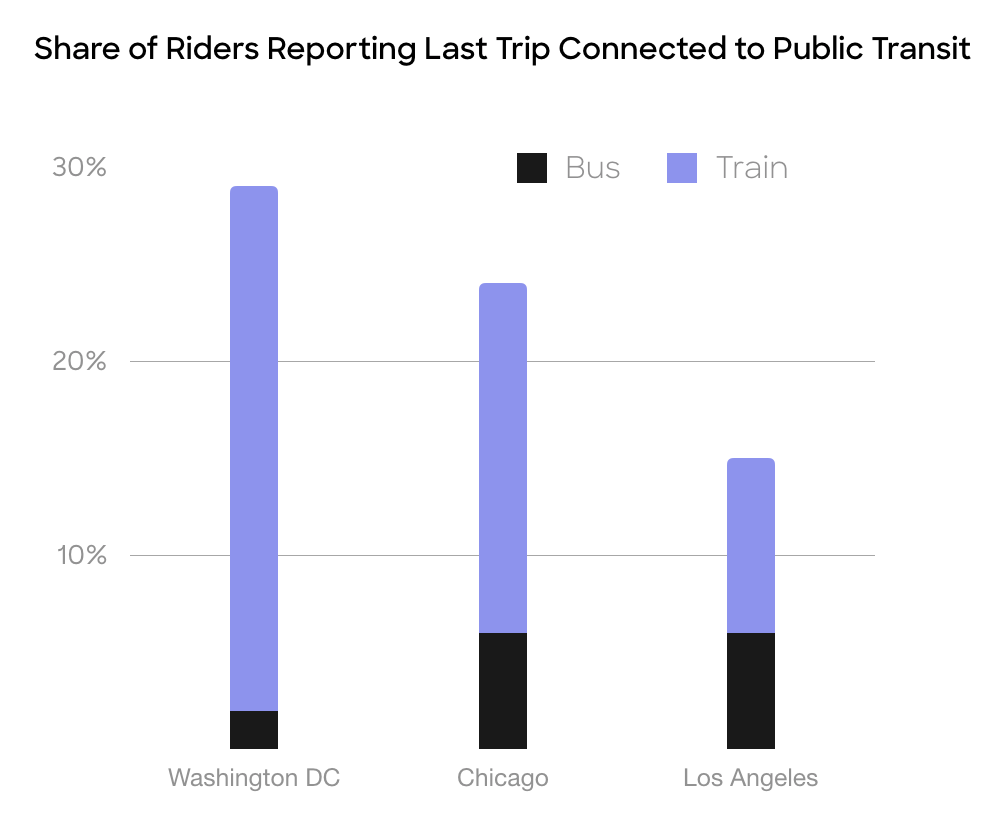 Visualizing the Link Between Scooters and Public Transit

In Arlington, VA, scooters are making it easier to navigate the dense, transit-oriented developments that hug the Metro. The access shed is roughly what we’d expect to see, covering 1.2 miles in each direction (in areas with no restrictions from land use planning or geography). 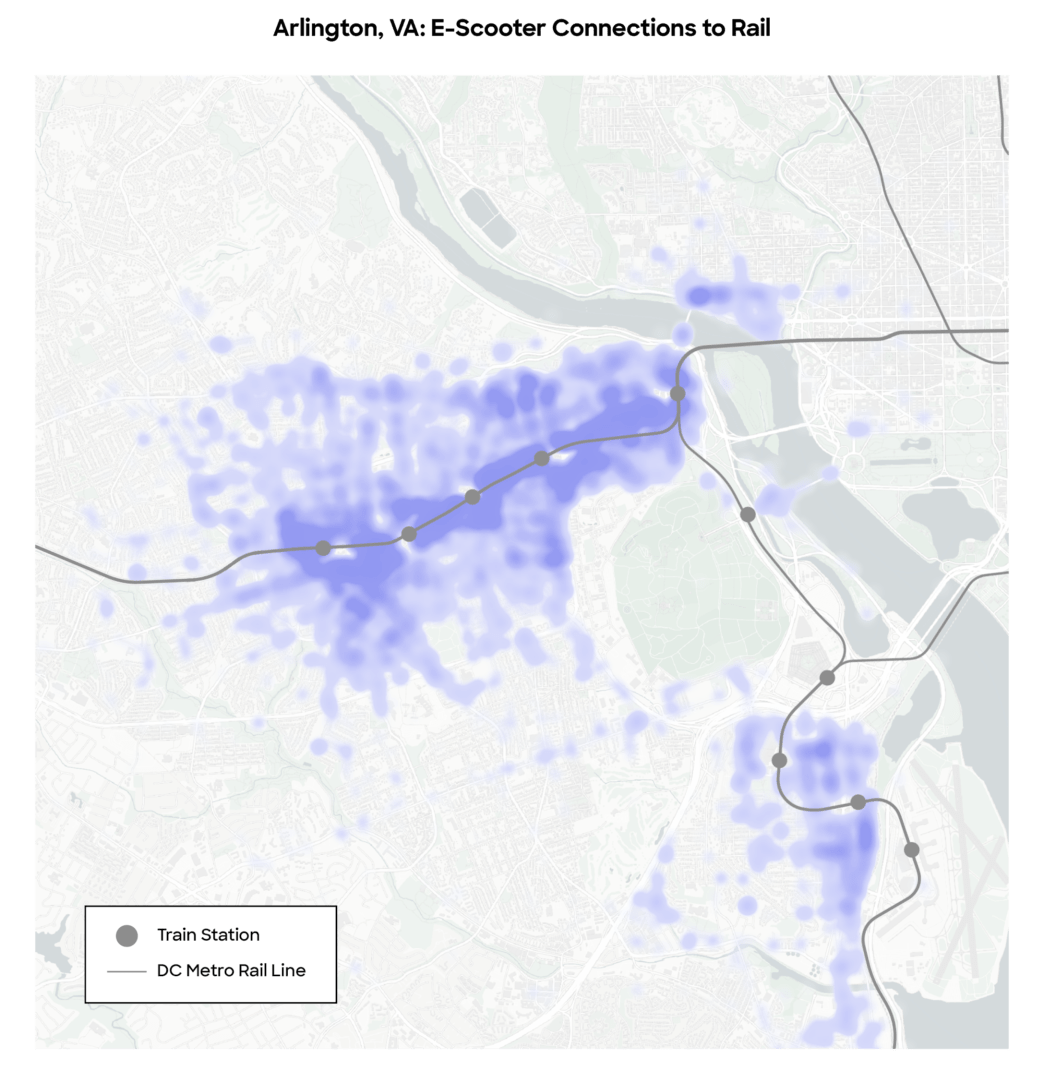 Scooter operator trips beginning or ending within approximately 600 ft of a DC Metro rail station in Arlington, VA, excluding points within that buffer (7/1/2019 – 8/31/2019)

Chicago shows a similar pattern. Here again we see that the access shed along public transit lines throughout the 2019 pilot area has a radius of around 1.3 miles. The shape reflects how people would likely have traveled by foot, only on a larger scale. 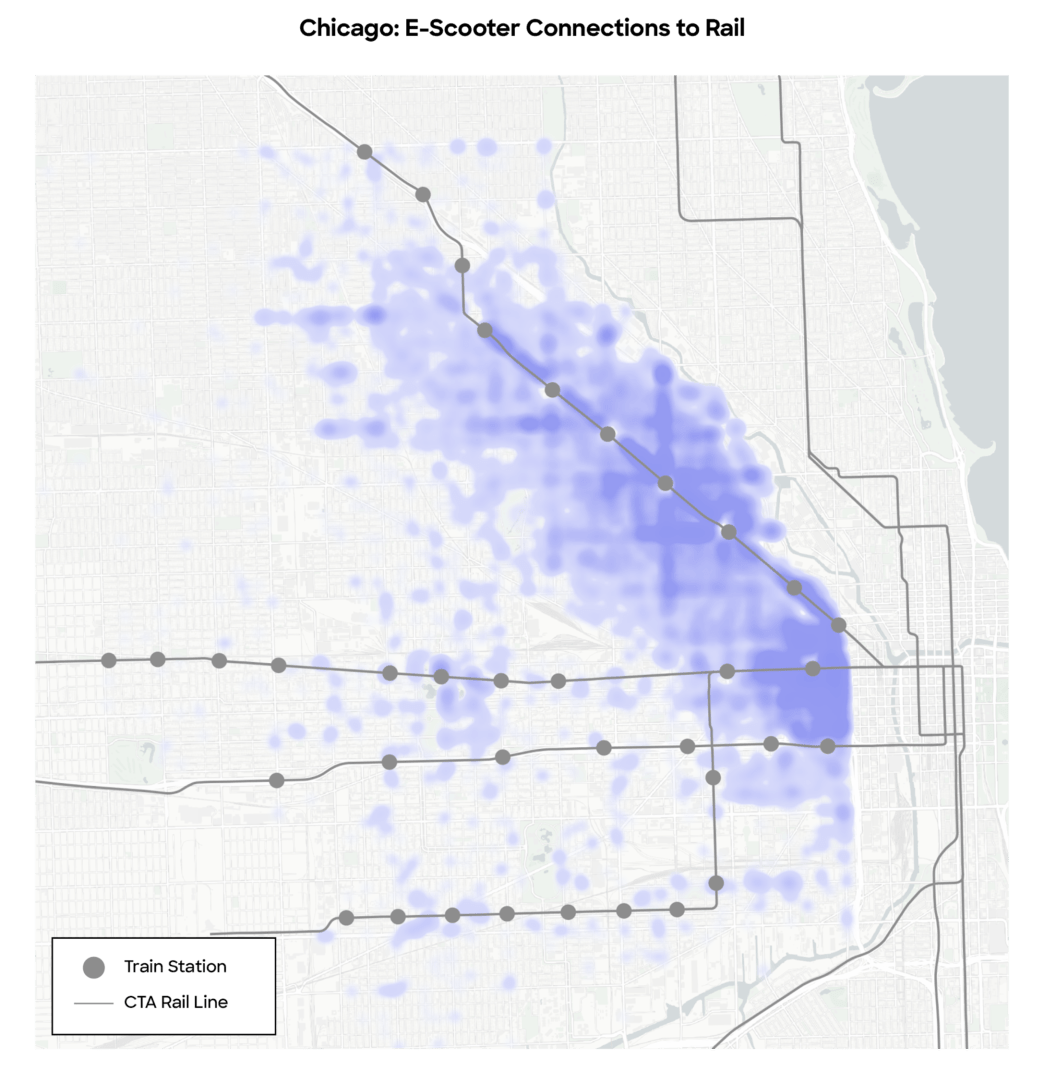 The same trend exists even in cities whose public transit systems are comparatively less robust. In Los Angeles, for example, the effect is particularly pronounced in areas with high commercial and/or residential density such as DTLA, Hollywood, Koreatown, Palms and West LA. 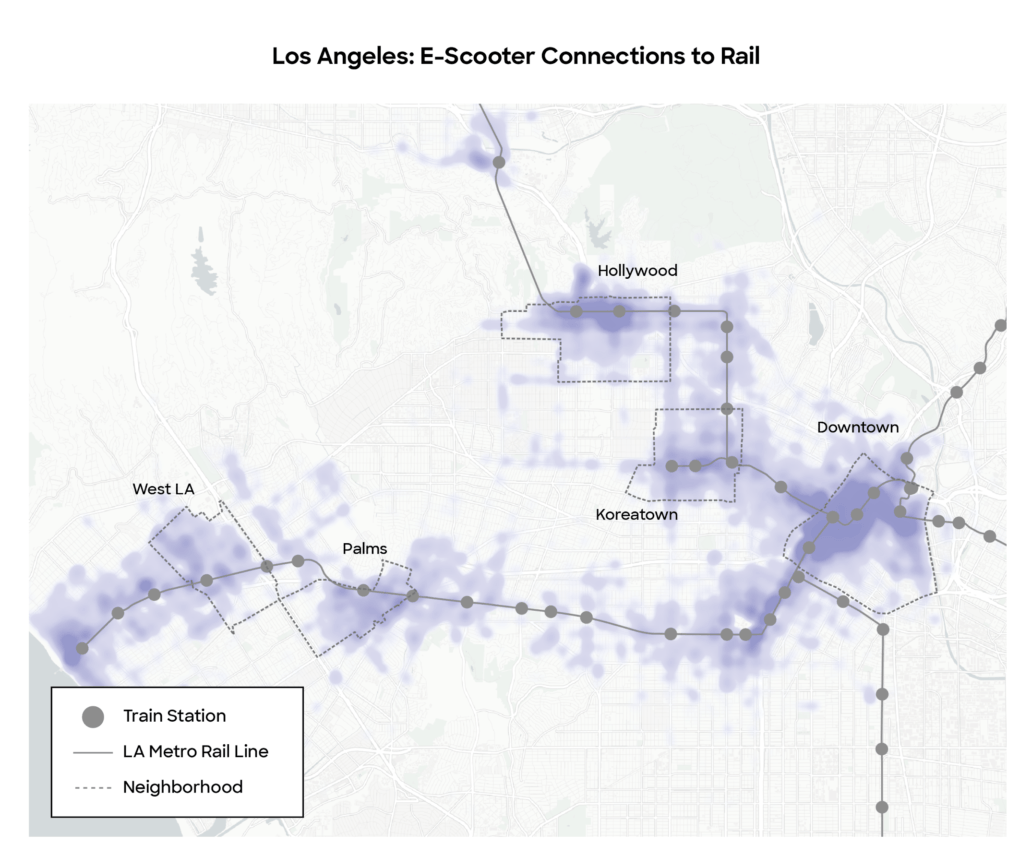 When we compare rider survey responses to the number of trips starting or ending near train stations, the consistent results reinforce the link between micromobility and public transportation. Scooter trips tend to average between 1 and 1.5 miles, the ideal length for extending the transit access shed and helping people choose trains and buses over cars, cabs and rideshare vehicles.

Applying Learnings to Other Major US Cities

These examples can be instrumental in helping other major US cities like Boston and Philadelphia figure out the best ways to integrate scooters into their transportation grids.

In Philadelphia, for example, we calculate that dockless micromobility could bring an additional 300,000 city residents within 7.5 minutes of a rapid transit station, giving them faster and more affordable access to jobs and services. 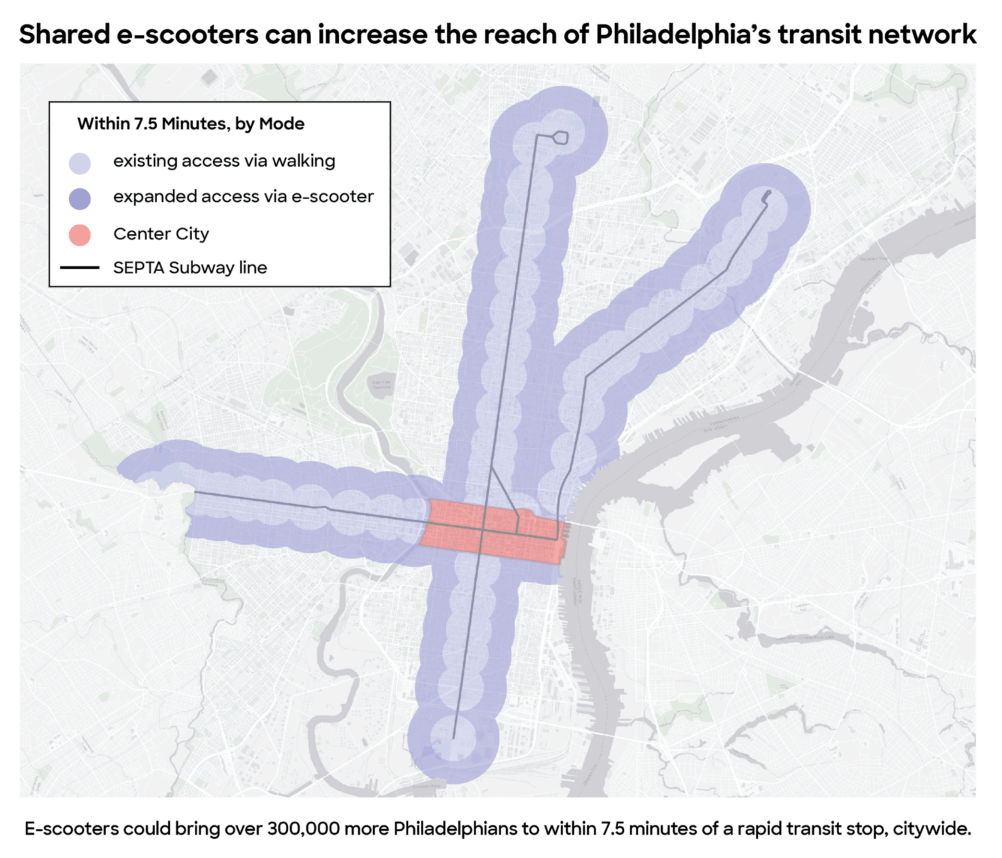 Similarly, adding scooters to Boston’s transportation network would connect many more people to the city’s main North and South Stations. This would be especially beneficial for those residing around the Seaport, Convention Center, and Fort Point—nearby areas that are experiencing a great deal of growth but have limited transit connections. 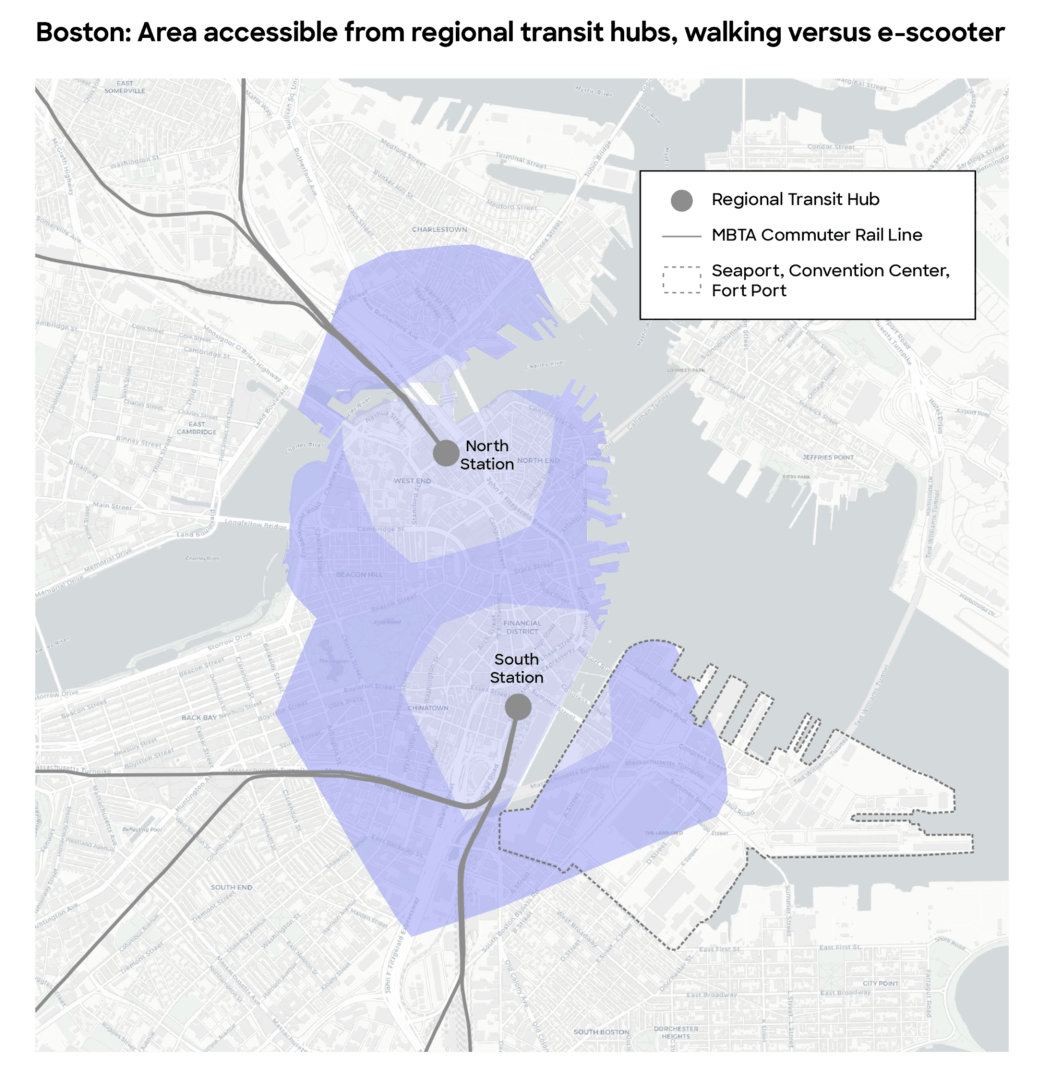 All of the examples above suggest that micromobility operators like Bird can play a critical role in expanding access to public transit and decreasing dependence on personal automobiles. As the industry leader, we’ve helped make integration seamless by working with cities to create dedicated space for micromobility parking around transit stations and surfacing in-app transit trip information.

Having seen the potential that micromobility provides, these are the types of strategies we’re excited to continue actively exploring in 2020 and beyond. 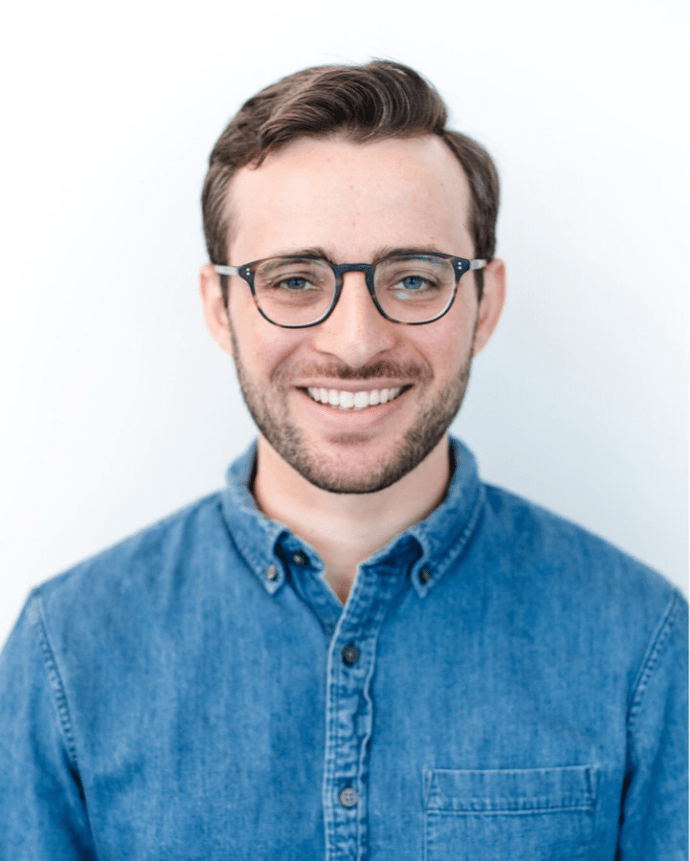 Louis Pappas is the Transportation & Mobility, Senior Manager at Bird, where he leads policy development and research on a wide range of transportation policy matters, with a special emphasis on Bird’s intersection with public transit. He is also the head of Bird’s Transit Solutions group that offers value-add services to transit agencies nationally to bring this connectivity to life, creating partnerships that enhance last-mile station access and improve multimodal connections.

Louis came to Bird from microtransit technology company and operator Via Transportation, where he created on-demand transit partnerships with agencies such as Transport for London and LA Metro. Before starting in the mobility space, Louis served for more than 5 years as a political appointee in the Obama White House, first focused on procurement policy at the U.S. Office of Management and Budget (OMB), and later as the head paralegal in the Office of the White House Counsel. Louis received his MBA from the Yale School of Management in 2016. 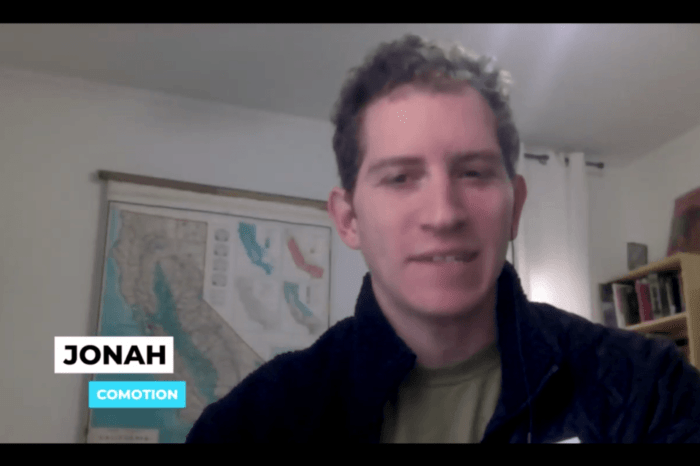