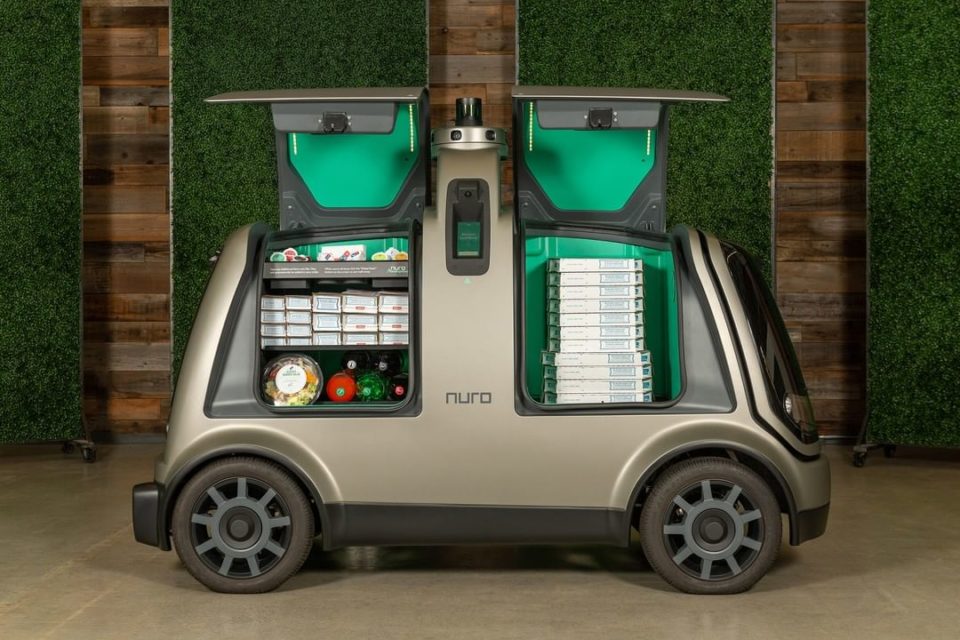 Hello again, friends! Are you feeling the heat of true amor? Valentine’s Day is coming up, after all… but we think you may actually be feeling that famed Miami heat, as CoMotion MIAMI is just over the horizon (and we recently revealed the theme of conference: “Future Mobility: Innovation+Resilience.”) On a more serious note: coronavirus is affecting more than just travel, as the automotive industry risks paralysis as Chinese quarantines shut down production lines across the vast country.  In other news, self-driving cars and autonomous delivery services are scoring permits left and right, and metro systems are expanding across the Global South. We also sat down with Michael Keane, CEO of Texas-based Blue Duck Scooters, to get some unexpected insight into its unique strategy for surviving the coming consolidation and shakeout in the sector. Read on to learn more…

Dead malls, ghost kitchens: Ghost kitchens are moving from parking lots to empty malls, as more and more retail space is cleared out by the rapid growth of e-commerce. But this is no scary story, it’s a blessing in disguise: delivery orders can be prepped closer to consumers, and property owners get to reactivate deserted spaces. What’s not to like…and pass the pizza, please.

Connections made at CoMotion: Los Angeles and London team up to launch the Innovator Cities network. Dedicated to solving global mobility issues, the aim is to innovate and test new solutions that can be deployed in other big cities across the world. Here’s to another exciting partnership launched at CoMotion LA!

Mumbai makes metro moves: More evidence of just how much we can learn from the Global South. Infamous for some of the world’s worst congestion, Mumbai is now rapidly expanding its metro system, with plans to build 14 new lines.

Miami mulls more Metromover: Miami-Dade advanced plans for much needed rail to Miami Beach, plus a potential Metromover extension to Wynwood. While the railways won’t be ready for this year’s CoMotion MIAMI, this is more proof that Miami is one of hemisphere’s most dynamic new mobility hubs.

Coronavirus concerns: With the coronavirus outbreak disrupting its Chinese part suppliers, Hyundai shut down all South Korean vehicle production. In a world of just-in-time manufacturing and global supply chains, what will expanded quarantines and closed borders mean for the auto industry?

Bad rap for map: We all rely on the Google Maps algorithm, but how vulnerable is it to misuse? A German artist illustrated the fragility of our device dependency by dragging a cart of 99 phones (with Google Maps open) around Google’s Berlin offices, causing virtual traffic jams along the nearly empty streets. As philosopher and semantician Alfred Korzybski said, “the map is not the territory.”

ICYMI: Miami is a bold city on the bleeding edge of the future. That’s why we think it’s a perfect fit for CoMotion, especially with this year’s theme – “Future Mobility: Innovation+Resilience.” Join us at CoMotion MIAMI as we dive deep into critical issues like climate resilience and automotive dependence, and explore innovative solutions that include micromobility, electrification, autonomous vehicles, urban aerial mobility, aquatic transport, transit oriented development — and so much more. Act fast – prices jump next week! 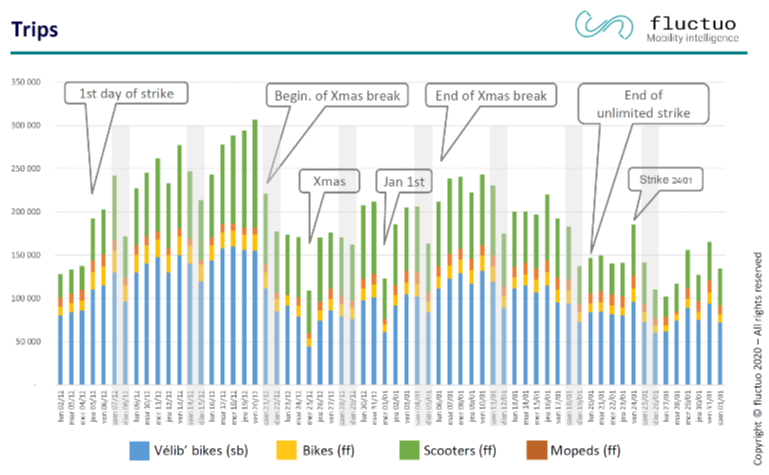 Strike in the City of Light: As French transit workers (and other professionals) were striking to maintain their pension rights, public transportation ground to a halt. In turn, commuters’ habits changed to adapt—ridesharing, car-pooling, cycling and other micromobility options all blossomed. Take a look at mobility analytic platform Fluctuo’s revealing charts and get a real feel for how the landscape of Parisian mobility fluctuates during tumultuous times.

Race to the skies: In the world of UAM there are a lot of big plans, but few actual test flights taking place. With New Zealand partnering with Wisk (a partnership between Kitty Hawk and Boeing), could we soon see an actual autonomous air-taxi trial take flight?

Get your kicks on Route 66: Things are looking up for Uber’s self-driving ambitions, as the California DMV just okayed its vehicles’ return to the roads. With a launch in D.C. planned for late this year, it looks like the company is headed for pole position in the race for AV dominance.

A regulatory milestone: AV delivery startup Nuro is the first firm to receive an FMVSS exemption to produce and test road-worthy vehicles with no human-driving capability. To pull off this feat, it beat heavyweights like GM’s Cruise to the punch—likely thanks to its low speed and lack of passenger capacity.

Drone delivery takes off: It’s wunderbar for Wingcopter, as the German drone startup takes to the skies in a new partnership with Merck and a local university. Testing UAV-based commercial deliveries isn’t unheard of… though flying over congested urban airspace without having to maintain continuous line-of-sight visibility is a big step forward regulation wise.

Duck Vs. Bird: As major micromobility players like Bird and Lime duke it out in big cities, Blue Duck Scooters has a different strategy: deploy “flocks” in secondary markets and college campuses, with a focus on providing high quality service and civic partnerships.

Legal or not, here they come! E-scooters are on track to becoming legal on UK roads, in a development set “to encourage green transport.” Brits have had no interest in waiting for the law to pass though, as UK sales of not yet truly legal electric two-wheelers has already grown 50% year over year.

A sign of things to come? While car ads are almost synonymous with the Super Bowl, Jeep teased its new e-bike to the 100 million+ people watching the game in their Groundhog Day commercial.

Think different: While Lime and Grow have been shrinking their presence, São Paulo based Tembici has expanded in Latin America thanks to a contrasting business model that includes major sponsorships and pre-paid packages.

Lyft’s lead lost: Once a leader in bikesharing, the past year saw Lyft stumble in the popular electric bike business, having to pull their e-bikes—twice—due to accidents. While the pink mustache spent time repairing and relaunching their bikes, competitors, like Uber, have taken the lead.

Will Boosted bail? Tough times for a micromobility pioneer—despite raising $60+ million, e-skateboard producer Boosted is hurting. Stung by trade war tariffs and a troubled pivot into the competitive scooter market, the Santa Cruz based company is reportedly looking for buyers.

SmartCitiesDive, saying that if we want smart cities, we need to double down on rail transit.

Rivian, showing us “Episode One: The Climb” of its new series “Adventurous Forever.”

Micah Kotch, explaining how the exit of NYC’s transit chief is a loss of visionary leadership.

CityLab, illustrating how urban sprawl is spreading across the globe.

The Seattle Times, sharing how the end of Seattle’s streetcars was the beginning of the city’s uncertain transit future.

With a Focus on Latin America, Cabify Beats Uber & Lyft in the Race to Ridesharing Profits