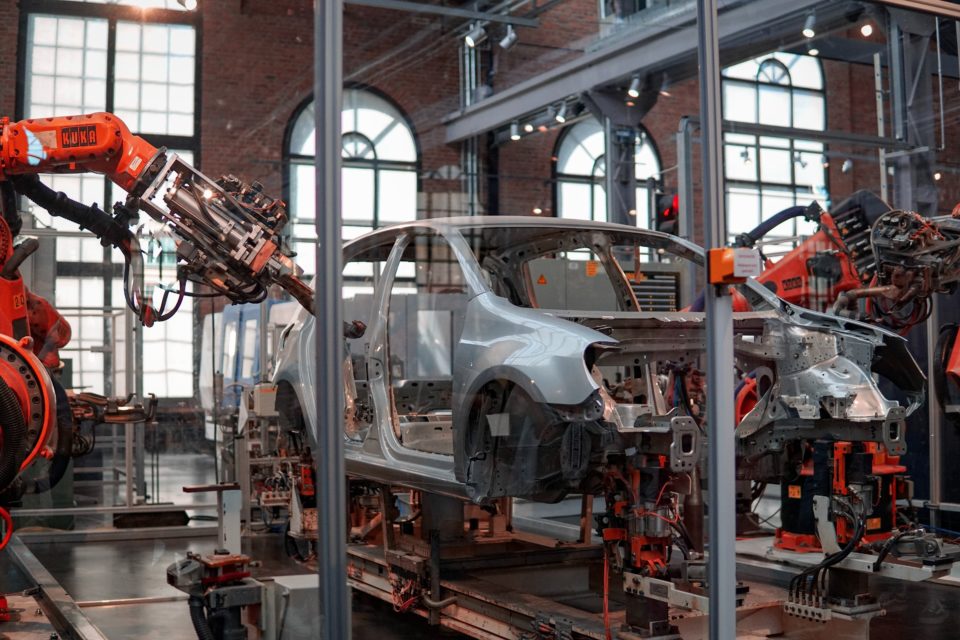 Hello friends, and a happy Monday to all. It’s been an electric week in the mobility world — quite literally. In the news, British Gas placed the largest commercial EV fleet order in Britain’s history; Volkswagen converted a German ICE vehicle manufacturing plant to an EV-only facility; and one of General Motors’ factories made the same conversion stateside. All that and more in this week’s CoMotion>>NEWS. 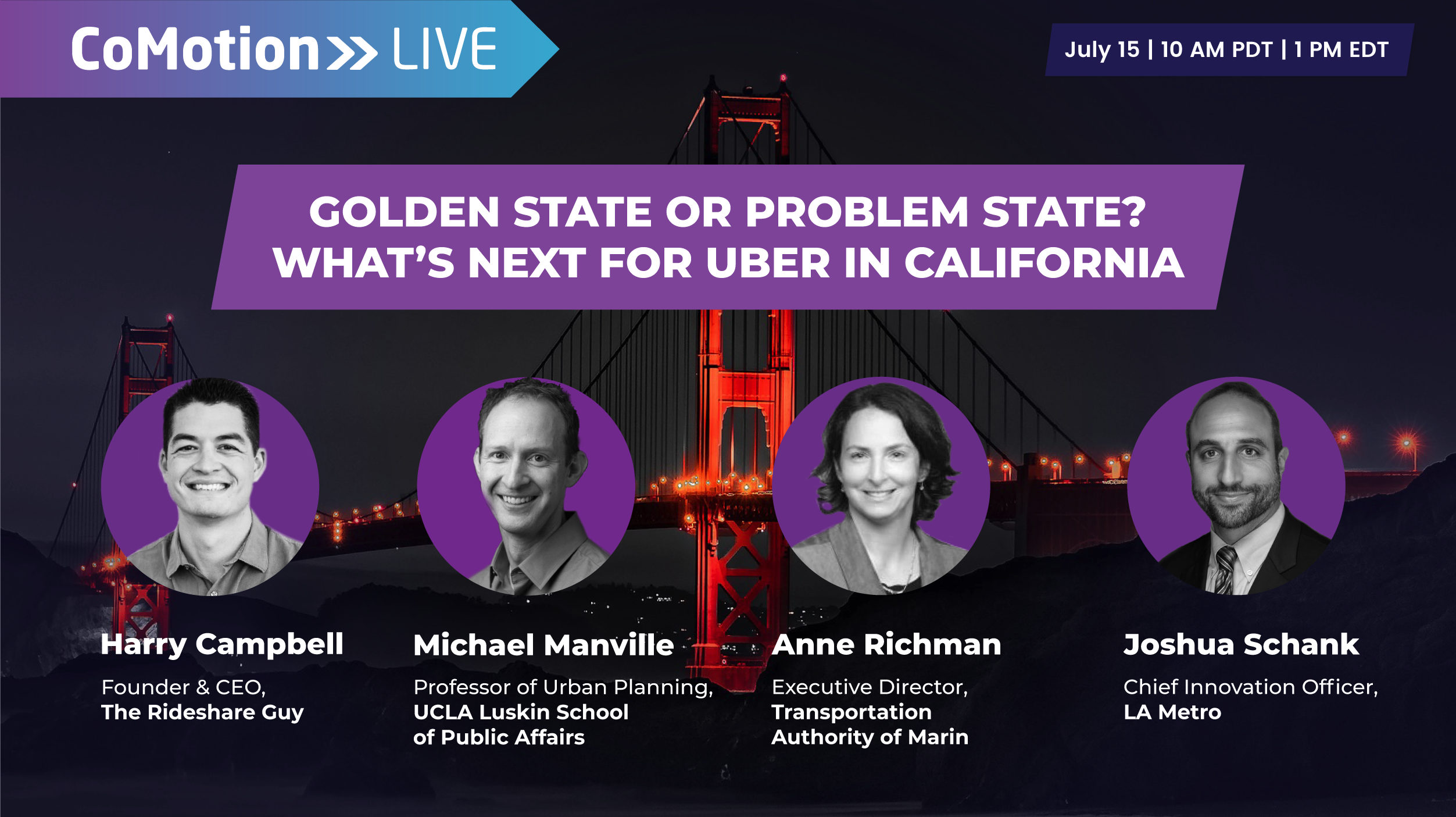 Don’t miss out on the next CoMotion LIVE webinar. It may be the Golden State, but that hasn’t always meant California has been easy-money for Uber. While the TNC has rolled out a number of innovations in its home turf — Pool, AVs, scooters, etc — it’s also seen a host of challenges, including a growing battle over whether rideshare and delivery drivers are employees or contractors, a classification that could make or break the company’s business model – especially as the company moves deeper into delivery following its Postmates acquisition.

Join us Wednesday at 10 AM Pacific for Golden State or Problem State? What’s Next for Uber in California, where we’ll chart out what’s next for the iconic TNC. Listen to UCLA Luskin School of Public Affairs’ Professor of Urban Planning Michael Manville, Transportation Authority of Marin’s Executive Director Anne Richman, LA Metro’s Chief Innovation Officer Joshua Schank and moderator Harry Campbell, The Rideshare Guy, for a can’t-miss episode of CoMotion LIVE. 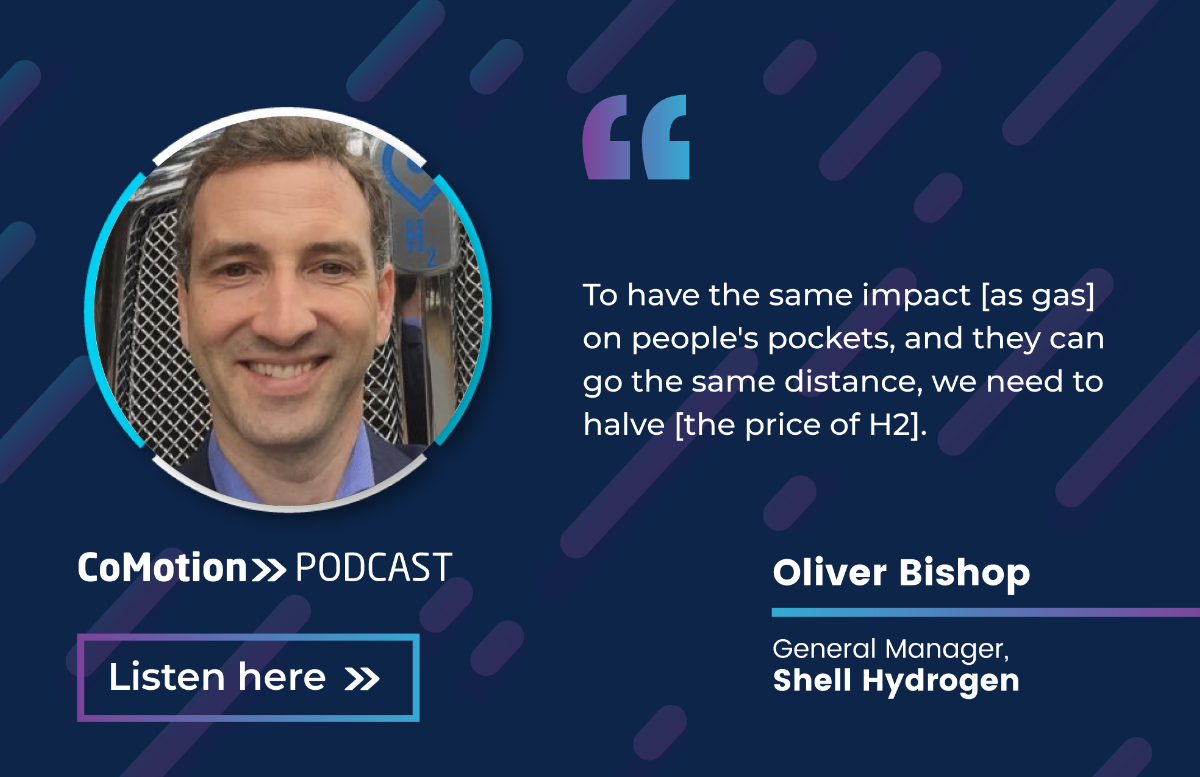 Episode 74. Greg Lindsay sits down with Oliver Bishop, General Manager, Shell Hydrogen, to discuss hydrogen fuel, how far it’s come in recent years, and the EU’s epic plans for H2. Greg Lindsay also chats with Jonah Bliss about Uber’s tie-up with Postmates and their unending battle against California and the classification of their workers, Tesla’s Cybertruck opening up pre-orders in China, the UK’s major order for a commercial fleet of EVs, and other happenings of the week. Listen here.

Who better than Oliver Bishop to pen a CoMotion PERSPECTIVE this week? When the world eventually emerges from lockdown, will it be hydrogen’s time to shine? Oliver Bishop makes the case for H2 — which could meet 24% of the world’s energy needs by 2050, leading the world to a greener, more sustainable post-COVID future.

BG’s EVs: British Gas is ordering 1,000 electric vans from Vauxhall, making history as the largest battery electric vehicle order for a commercial fleet in the UK. The move helps the gas company towards its goal of electrifying its entire fleet by 2030.

Post Postmate plans: continuing its push into the on-demand delivery space, Uber will begin offering groceries through its app. The new option will first arrive in 19 Latin American and Canadian cities, as well as Dallas and Miami. A welcome addition as the pandemic drags on…

Sinotruck: Tesla has begun taking preorders from China after reaching over half a million U.S. preorders for its Cybertruck. Though the futuristic truck was unveiled last November, production isn’t expected to begin until late 2022. Gotta make sure those windows are actually shatter-proof.

Going electric: after shifting its Zwickau, Germany factory from ICE to EV production, VW is converting another German factory, in Emden. The plant will begin producing EVs in 2022. VW’s come a long way since Dieselgate.

Investor confidence: EV automaker Rivian just raised a whopping $2.5 billion, bringing its total funding to date to about $6 billion. Some  $5.35 billion of that has come in the past year and a half alone, as Rivian moves to launch its all-electric pickup and SUV in early 2021.

A picture is worth a thousand words: get a unique look at New York City’s subway through the lens of Patrick Cashin, the official M.T.A. photographer. From bridges, to tunnels, and — you guessed it — trains, Cashin shares some of his most stunning images he’s snapped over the past 20 years. Who knew transit could be so… beautiful?

So long Sonic, bonjour Bolt: General Motors is ending production of the gas-powered Chevrolet Sonic, which was manufactured at its Orion Township Assembly near Detroit. The plant will become an all-EV factory, pumping out Bolt compacts and Chevy’s all-new Bolt “electric utility vehicle.”

Anchors aweigh: hoping to stave off losses from the global drop in ride-sharing revenue, Uber ties up with Thames Clippers commuter service in the UK to launch Uber Boats in the London area. The service will operate as usual, with passengers now able to buy tickets through the Uber app.

Must be good Karma: Irvine-based, Chinese-owned Karma Automotive receives $100 million in fresh funding as it seeks to market its EV platform to other automakers and OEMs. This new capital will also help fuel Karma’s push into the burgeoning commercial delivery truck space. But $100 million doesn’t go very far in the automotive world.

A safer way to reopen: San Francisco-based Populus is partnering with over a dozen cities to advance its digital Street Manager tool, which is meant to help cities safely reopen their economies. Cities will be able to digitally manage new street and curb policies as open streets spread, expand bike lanes, and help restaurants add outdoor dining or delivery pick-up curb zones.

Fee for an EV: Beginning this month, California will charge EV owners an upfront registration fee of $100 for 2020 model year plug-in vehicles. As the Golden State is the biggest EV market in the US, and the annual fees, along with the rest of CA’s EV fees, are expected to generate hundreds of millions, if not billions, over the next decade, which will go to infrastructure repairs. The fees will range from as low as $25 to $175 depending on the vehicle’s value.

Following their New Mobility Risk Management workshop at CoMotion Miami LIVE, Founder Shield has lined up a special panel on the Ride-Share and Peer-to-Peer vehicle leasing industry. Join them on Wed July 15th @ 1pm ET / 10am PT along with Getaround, Via, HyreCar and ibott @ Apollo for a roundtable discussion.

They’ll be discussing what is most important to sustainability & continued growth, as well as what transportation needs may look like in the future.

Look Ma, no hands: Guangzhou-based self-driving startup WeRide will test fully driverless cars on open roads in China, becoming the first AV company to do so. While competitors like Apollo, AutoX, Didi Chuxing and Pony.ai are also road testing in China, those companies still rely on backup safety drivers.

Self-driving or self-delusion: according to chief executive Elon Musk, Tesla is “very close” to achieving “the basic functionality for level 5 autonomy” this year. That’s, um,  a bold claim, seeing as no company has created a fully self-sufficient, driverless AV.

The Bike Cavalry: the number of people participating in Black Lives Matter protests on bicycles in New York City continues to increase, numbering in the thousands.

Bike and chill: Netherlands based Swapfiets, considered to be like a Netflix for bicycles, expands to multiple European cities, offering subscription bike rentals and repairs/replacements.

Are you insured? European insurance provider Bikmo finds that electric bicycles might be less risky than their conventional counterparts, resulting in 38% fewer insurance claims. Time to convert that old Schwinn!

JUMP drama continues: after thousands of JUMP’s distinctive e-bikes were scrapped in the US and pulled from European cities, demand for e-bikes seems to have prompted their return to the streets of London.

The New York Times, taking us on a photographic journey along the first railroad in North America owned and operated by First Nations people.

Energy Institute at Haas, making the case that cities should make subways free.

Curbed, showing that by putting transit at the center of the fight for equity and racial justice, real change can begin.

SmartCitiesWorld, explaining how Hyperloop could change transit post-COVID as the world pushes towards a greener future.

Bloomberg CityLab, laying out how the pandemic exposed cities’ pedestrian infrastructure and its need for major improvements.

Forbes, offering the thought that maybe high-wattage rapid charging isn’t the way of the future.

The New York Times, painting a picture of a future without cars, and the glimpse into that possible future the pandemic provided. 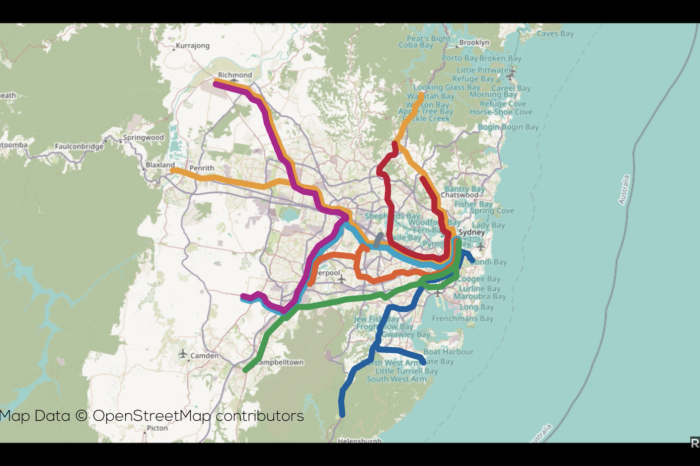