This week, take a moment to appreciate just how rapidly the auto industry is changing. A new analysis by Reuters estimates that in just past year car-markers have doubled their EV spending commitments, and now plan to invest a whopping $1.2 trillion in EVs through 2030. And that’s not counting the big investments from Uncle Sam, including the $2.8 billion announced last week to support U.S. battery makers.

Similarly, even if a fully driverless world remains frustratingly distant, billions of dollars of investment are leading to big changes, including ever more advanced driver assistance programs and flawed-but-mostly-functional driverless ride-hailing in San Francisco, Phoenix and, perhaps soon, Los Angeles. And yet, a Lyft co-founder says ride-hailing will rely primarily on human drivers for at least another decade.

Also: GMC unveils another massive electric truck, Washington D.C. launches a Mobility Innovation District, Tesla has a middling Q3, Montreal cites supply chain problems in delaying the opening of its new rail system, DC Metro gets fancy new trains, an Argentinian fintech startup offers ride-hailing drivers loans based on their driving history and why does the Chinese province of Guangdong have more EV chargers than the entire United States?

This is just how big the EV market is: Automakers will spend $1.2 trillion through 2030 developing EVs, according to an analysis by Reuters. The updated estimate doubles what Reuters was projecting just last year, based on plans announced by automakers.

Another EV on steroids…: Just as it begins deliveries of the Hummer EV, GMC unveils another big electric truck. The Sierra Denali EV boasts 754 horsepower and a range of 400 miles. The first vehicles delivered in early 2024 will cost $107,000, but there will be much more affordable versions priced at around $50,000 in 2025 and beyond – competing with Ford’s F-150 Lightning, which retails for $47,000.

Lyft co-founder says drivers have at least another decade: Even as Lyft begins experimenting with autonomous rides in Austin, company co-founder John Zimmer says it’s unlikely to see AVs replacing human drivers on a large scale in the next decade. Even long-term, he sees AVs accounting for a small portion of overall rides, rather than replacing drivers entirely.

Xpeng previews new ADAS: The Chinese EV maker unveils a new driving assistance program to rival Tesla’s Autopilot. The new system will be made available to customers gradually. The initial version will be able to conduct certain operations in urban environments, such as switch lanes. In the second half of 2023, the company plans to authorize the system to do more complex tasks, such as parking and overtaking other vehicles.

Waymo eyes LA: After offering driverless rides for three years in the Phoenix area, Waymo announces plans to expand into America’s second largest city. The company’s vehicles are already on the streets of Los Angeles, collecting mapping data, but it’s unclear exactly when Waymo One, its taxi service, will launch ride-hailing operations.

Feds give battery companies $2.8B: The Biden administration announces $2.8 billion in grants for 20 companies involved in EV battery manufacturing. This is part of the $7 billion earmarked for battery production in the bipartisan infrastructure law that was approved last year. Like many other EV programs included in that bill or the more recent Inflation Reduction Act, the subsidies for battery manufacturing aim to reduce U.S. reliance on China, which is currently supplying the vast majority of lithium for batteries.

D.C. launches Mobility Innovation District: The U.S. capital opens a district in the southwestern corner of the city with access to a variety of micro-transit options, including electric shuttles from Circuit. There is also talk of creating mobility wallets allowing the city government or employers to subsidize mobility options, such as bike-share, e-scooters and transit. Let’s see this rolled out to cities across the land, please.

Tesla comes in under expectations: The $21.45 billion in Q3 revenue for the world’s most valuable automaker fell about a half billion dollars short of Wall Street expectations. Tesla says it expects year-over-year production to increase by 50% this year and Elon Musk, with typical bravado, assured investors that strong demand portends a strong Q4.

Washington’s fancy new trains: The next generation of trains for Washington D.C.’s Metro will have heated floors, charging outlets and digital maps that are updated in real time to account for disruptions. The trains, manufactured by Hitachi Rail in western Maryland, will have more cameras on the inside and the outside, hopefully deterring more crime.

Rail system delayed again in Montreal: The first segment of Montreal’s planned 67-kilometer light rail system won’t open until at least next spring, nearly two years after it was originally planned to open. Officials attributed the delays to lingering damage to the supply chain caused by the pandemic and the ongoing disruptions associated with the war in Ukraine. The new system will supplement the existing subway by connecting suburban communities with the city center and the airport.

One Chinese province with more chargers than the U.S.: Bloomberg looks at Guangdong, the epicenter of China’s tech industry, where there are already more EV chargers than in the entire U.S. The abundance of charging infrastructure has eliminated range anxiety and made EVs very attractive.

The Port Authority’s autonomous aspirations: New York Times reporter James Barron is happy to report that the driverless shuttle being tested out by New York’s Port Authority stopped when he walked in front of it. Driverless shuttles are one of the tools that will allow airports to build ever-bigger terminals without forcing air travelers to walk for miles.

Loans based on driving history? Uils, (pronounced wheels), an Argentinian fintech app aimed at ride-share drivers, uses an algorithm that takes into account driver history when setting the terms of its loans for gig workers. TechCrunch delves into the benefits and potential pitfalls of this approach, which relies on drivers offering Uils access to data from other apps, such as Uber and Lyft, to determine whether they’re a safe and reliable driver.

Driverless revolution stuck in the slow lane: In the Financial Times, Elaine Moore underscores disagreements about how AVs should interact with everyone else using the transportation system and what level of risk the public should accept from driverless cars. These are not easy questions to resolve, and part of the reason it’s hard time imagine AVs taking over soon. 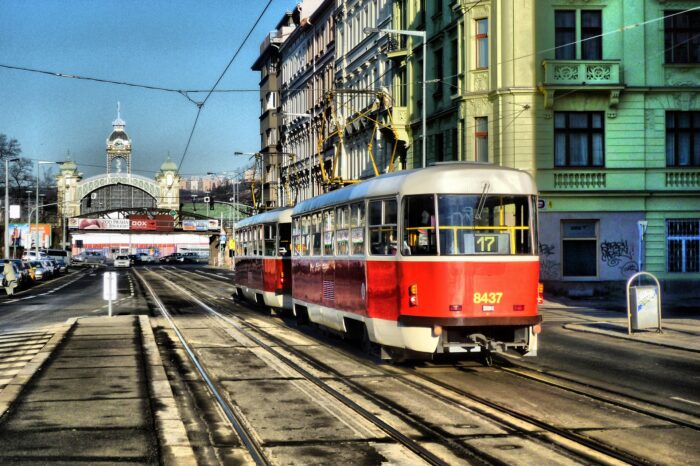 Week in Review: Cheap transit in Germany, cheap e-bikes in Denver & a cheap EV from Sono