Stuck in Neutral: Will the Pandemic Make or Break SoftBank’s Struggling Mobility Portfolio?

Vision Fund’s Mobility Bets Have Struggled Mightily in 2020 – Could Building a Mobile Wallet “Super-App” Mean There’s Light at the End of the Tunnel?

It’s impossible to talk about ridehailing and the future of mobility without talking about the impact of SoftBank. The Japanese conglomerate and its immense Vision Fund haven’t merely financed many of the globe’s largest players — household names like Uber, Didi Chuxing, Rappi, DoorDash, Ola, and Grab, as well as less familiar companies like Auto1, Delhivery, and Nauto — the size of its investments make it “the emperor of the entire ridehailing business,” according to Tom De Vleesschauwer, an analyst with IHS.

The capital SoftBank bets on companies gives them competitive and comparative advantage; the sheer amount creates a barrier to entry for competitors, and the fund hopes, provides time and space for a business to seize market share and succeed. Global ridehailing revenue hit $75.8 billion in 2019, per PitchBook, and a large chunk came from companies with significant SoftBank investment (Uber alone brought in $10.7 billion).

SoftBank and its Vision Fund have made 100 separate investments in over 60 companies in the mobility space, often large, risky, long-term bets that can commit billions to a vision of transportation that’s still far off, and seems further yet amid this year’s downturn.

This could get worse very easily.

The Vision Fund gets hit by coronavirus

That was all before Covid-19 literally stopped the industry in its tracks, and introduced the big-check investment strategy of SoftBank and its founder, Masayoshi Son, to its first prolonged global financial crisis. The growing Mobility-as-a-Service (MaaS) sector has been devastated, with Uber and Lyft facing between 75% and 80% declines in trip requests in the year to date, compared to 2019. In the financial year ending in March 2020, the Vision Fund took an $8.9 billion net loss, a record for the fund, with $5.2 billion of that coming from Uber alone.

The question is: will COVID find the fund over-invested as its bets fail, or will SoftBank emerge in a stronger position post-pandemic?

“This could get worse very easily,” says De Vleesschauwer. “It’ll be interesting to observe how SoftBank will respond to it. Timing may be right for some weaker players to leave the market and drive consolidation, to their advantage.”

How much has 2020 hurt SoftBank-funded companies and their employees?

As of the end of June 2020, mobility startups backed by SoftBank company have laid off more than 16,800 workers, according to Business Insider research and other sources, suggesting significant effort to trim expenses and right the financial ship. Here’s a rundown of some of the actions taken by different companies:

This comes on the heels of massive losses in the rest of the Vision Fund’s portfolio, including WeWork and Indian hotel startup OYO, as well as complaints from activist investor Elliott Management Corp., which owns a $2.5 billion stake in the Vision Fund, that SoftBank needs to be more disciplined. Son himself said that companies need to focus more on revenue over growth this year, one reason many CEOs gave for the significant job cuts. Uber CEO Dara Khosrowshahi said he will focus on core mobility services, and is charting a path to profitability by the end of 2021.

Why some investors are still interested: long-term potential and post-pandemic shifts in consumer behavior

In January, before COVID became a pandemic, two AllianceBernstein analysts, Chris Lane and David Dai, explained that SoftBank was still “the Berkshire Hathaway” of tech, focused on “enormous long-term gains.”

Son’s strategy of making multiple big bets in companies that can move all manner of cargo, even in companies with overlapping service areas, may prove wise, or at least pay off, during the current disruption; while ridehailing faces a serious slump, delivery, logistics, and even other services are in high demand.

In my opinion, getting around in a car, the smartphone as a mobility service, will only suffer a mid-term decline.

Here are some of the bright spots amid SoftBank’s mobility investments in the first half of 2020:

“The food business is keeping everyone alive,” says De Vleesschauwer. “There’s just been a huge pickup, especially in South and North America. In my opinion, getting around in a car, the smartphone as a mobility service, will only suffer a mid-term decline.”

Despite the instability, headwinds, and economic challenges, investors are still looking favorably at mobility startups as long-term plays. PitchBook found investment in the sector in the second quarter of 2020—including two sizable SoftBank investments in Didi Chuxing—hit $10.8 billion, up 7.3% over the same quarter last year, propelled by “the need for contactless delivery and socially distanced commuting options.”

Across the globe, the companies SoftBank has invested in have been buoyed by the ability to add logistics, food delivery, and even partner with transit agencies to offset losses in the core ridehailing businesses.

A big lesson: diversified platforms that offer delivery, and in some cases, payment and ecommerce offerings, can better weather the storm, especially if superfluous investments get trimmed (Uber has taken a hard look at freight and self-driving research, for example). This is the “super-app” approach, creating a one-stop platform for ridehailing and mobility and expanding it into a larger ecosystem encompassing other services, including banking. 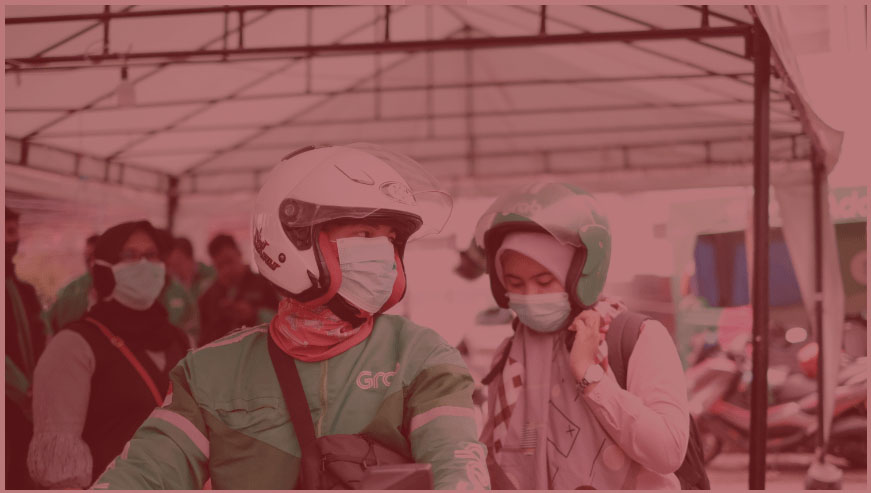 “COVID has vindicated the super-app approach,” says Asad Hussain, mobility analyst with PitchBook. “Look at Didi Chuxing in China. In 2018 and 2019, they started expanding into food delivery, similar to what Uber’s doing now. That’s a super competitive market in East Asia, and they weren’t able to make inroads initially and drive the synergies investors wanted. But then COVID happened, and demand for food delivery skyrocketed.”

The super-app and mobile wallet approach could pay dividends for SoftBank, especially if Uber is able to iterate on some of Grab’s innovations and add a full-fledged mobile wallet to its mix of offerings. While Americans have some experience with mobile wallets in the form of Apple Pay and Google Pay, third party apps have been slow to integrate that functionality into their offerings, even as that combination has been popular and profitable in Asia for over a decade. Other ridehailing companies have started to tiptoe into that market, as Indonesia’s GoJek recently raised a Series F round with investments from PayPal and Facebook, with both firms eagerly eyeing the company’s growing digital wallet footprint. As coronavirus is speeding up the world’s transition away from physical cash, apps that act as the de-facto replacement will only grow more central to consumer’s lives.

COVID has vindicated the super-app approach.

Emblematic of the wide net the company tends to cast, other SoftBank-backed firms are taking divergent approaches to creating the infrastructure for a mobile, on-demand, future. Take SoftBank’s investment in REEF Technology, a company that owns parking lots and parking garages across the United States and Canada now valued at $1 billion. It’s a play to create the hubs for future commerce, focused around proximity; by transforming garages into ghost kitchens, electric vehicle charging stations, and e-commerce warehouses, SoftBank is investing in the support infrastructure for a fleet of delivery drivers.

“Uber and Lyft, the western players, have missed an opportunity to become more of an ecosystem” says De Vleesschauwer. “Grab and others have taken the lead; it wasn’t a given for all their users in Southeast Asia to have a bank account, and creating an ecosystem with financial services at the core is where the opportunity lies. SoftBank is in the middle of this.”

Hussain sees REEF, and the diversification within many companies, as part of a larger strategy towards logistics, and the landscape of delivery and eventually, autonomous technology. Consumer demand for delivery has exploded, and companies are investing billions to create fulfillment centers and add last-mile delivery capacity. Why can’t Uber or Didi Chuxing be part of filling that need?

These diversified apps also have invaluable consumer data that can also become a massive asset. Rappi, for instance, offers brands who sell on its platform insightful customer data perfect for advertising purposes: if, say, Gillette wanted to send free razors to all 20-35 year-olds within a certain neighborhood in Mexico City, Rappi could facilitate such a sample distribution in a day. Luis Techera, head of strategic partnerships for the app in Mexico, said that’s “an attack nobody has.”

What’s the long-term future may hold

Time will tell if the diversification strategies, and the slow return of ridehailing, can help SoftBank’s mobility investments not just recover but become profitable post-pandemic. What’s clear is that Masayoshi Son is still playing with a “bet big” strategy.

“SoftBank has gotten criticism for driving up valuations in the private market, but they really act like a public market investor, making multiple bets on the tide rising, not any individual company,” says Hussain. “They bet on the trend, not the company, and they win regardless, since they’re invested in all the players. They’re about bold bets, and not about performance a quarter or two from now but about what the world will look like in 10 or 15 years.”

Hussain doesn’t dismiss these issues, but he believes these are headwinds in the long term, solvable issues that will only impact margins and delay the path to profitability. These services are becoming embedded parts of consumer behavior, which highlights how SoftBank’s bet on the future might be an especially lucrative one if it ends up building that future itself. Perhaps COVID will force these mobility startups to be more lean, focused, and ultimately, profitable.

“Are we going to go back to takeout and taxis? I don’t think so,” Hussain says. “There will be headwinds, but longer term, consumer acceptance and adoption are strong. There’s a long runway of growth for these businesses.” 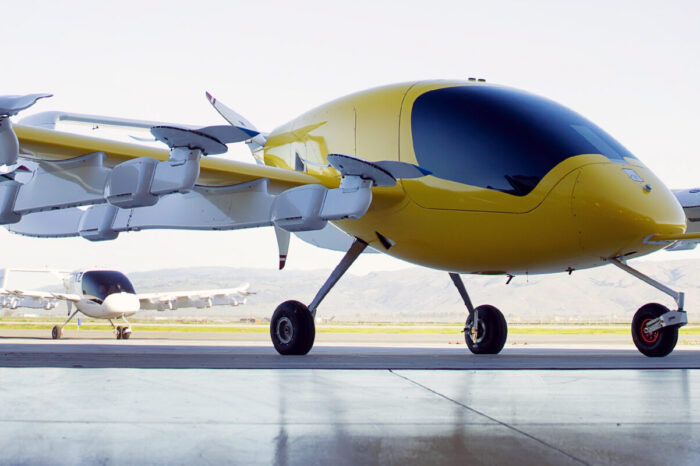 CoMotion LIVE: The Sky's the Limit: Regulating the UAM Revolution